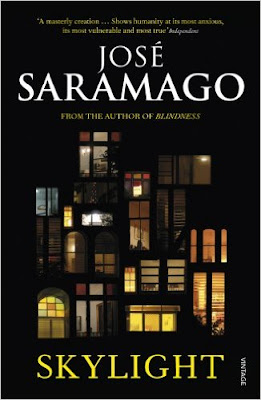 Let's say you're a young writer, and you submit a manuscript of a novel to the publisher, but the publisher somehow loses it. You don't hear about the manuscript again, until 36 years later, and you're already an accomplished writer. The publisher now already knows the manuscript will sell, because you've already made a name for yourself. Saramago faced exactly that situation, with his novel Skylight. Instead of opting to publish the manuscript, he decided that he novel won't be published while he was still alive. So this novel remained unknown until after he died, in 2010. It thus provides a very interesting take on Saramago and his works, by acting like some sort of time capsule, allowing readers who are familiar with his later works to see where his powerful ideas and methods of storytelling came from.

I am rather familiar with José Saramago's writings: I have read 14 books of his in the past. So I was quite excited to read this one. And I must say that I was in for a surprise. Saramago's never-ending and flowing paragraphs are not there yet, for example. And frankly speaking, if I read Skylight without knowing who wrote it, then I probably would not identify it as something Saramago wrote.

See, if I temporarily disregard my knowledge of his other works, then I would say that this is just an interesting yet ordinary book. I cannot find anything that would set it apart from other works. It is a novel about the tenants of an apartment in Lisbon in the 1940s, and every chapter basically rotates and tells a snippet of the regular lives of these tenants. That was an interesting narrative device, I must say, but aside from that, I honestly cannot say that it was a wonderful book and something that I would consider reading again.

However, once I look at Skylight through the lens of the other books I have read, then I realize that this was Saramago's sketch, so to speak. This is an early-stage work, showing how he eventually developed his later ideas that his later books have fully fleshed out. One realizes that it is actually a very modern work, a novel showing a break with tradition, displaying non-traditional ideas which perhaps are a little advanced for its time, back in the 1950s. I won't repeat what the preface has said about the book, but I should say that in order to appreciate this book to its fullest, one must first be familiar with Saramago's later books. One will see character sketches and parallelisms between his later characters and the ones that fill the pages of Skylight.

So, read this book if you're already familiar with Saramago's other works, and you'll have a better time appreciating this one. If you are reading Skylight as an introduction to Saramago, then I am afraid that doing so might even scare you from reading his other books. He was such a very powerful writer, but this book isn't a good book to start. Nevertheless, this book provides a good context for the later works, and therefore I give it 4 out of 5 stars.