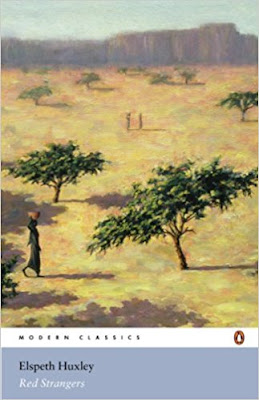 This is such a tragic book. And I was so torn while reading it, mostly for conflicting ideas revolving around the pros and cons of issues such as science and technology, as well as cultural relativism. If these are topics that interest you, then Red Strangers is a must-read.

Red Strangers is a book by Elspeth Huxley (cousin-in-law of Aldous Huxley), narrating the conflicts that appear when European colonialists entered Kikuyu territory. The book is written from a Kikuyu perspective, and the narrative spans 5 generations, showing slowly how traditional Kikuyu rituals and customs are giving way to European ones. It is amazingly written and immerses the reader right in the middle of the Kikuyu mindset such that when the Europeans arrive in the narrative, familiar European customs become almost unrecognizable to the reader.

All throughout the book, I had little mental battles with myself. On the one hand, I found it tragic that cultural diversity was being reduced, and that traditional practices were slowly being eradicated because of incoming outside influence. It was basically the anthropologist's nightmare. But on the other hand, I also think that this is a natural consequence of the progress of science and technology. And it is simply natural to expect that the group with the better science will ultimately prevail. On top of that, I guess I do not believe in cultural relativism anymore: I suppose part of me already thinks that there are some cultural aspects that have flaws, and must not be embraced simply because they are part of some culture.

Reflecting on it, I don't believe there is an absolute truth. Truth, and its implications, are relative, and change over time. But I do think that if you take time constant, and take a snapshot of the state of affairs of the world in one particular time, then you would see absolute truth, so to speak. I do not buy the idea that my truth can be different from yours right now in this moment. But I do recognize the possibility that my truth can be replaced with some other more superior truth later, in a different time. After all, this is scientific progress. If you give me a better hypothesis, then by all means I would adopt that hypothesis. But don't tell me that your current hypothesis is also valid, when my current hypothesis explains the world better than yours.

All of this is at the intellectual level, but what I don't want to forget, and now mention, is the fact that there are tragic consequences to these scientific and technological advances. This book makes me think on how one can advance science and technology and yet still be responsible in doing it. When Europeans arrived to Africa, they were brash and cruel, treating locals as second-class citizens, sometimes even as slaves. All because they had the better science. All because their medicines were more effective than the goat sacrifices of the Kikuyu. All because their guns were more powerful than the spears and swords of the Kikuyu warriors. But I think one thing lacking here is the respect for human rights. This is a tricky song to dance to, but as responsible human beings, I think it should always factor into all decisions we make. It is one thing to advance science, but it is another to advance it responsibly.

Overall, I found this book very moving, and raises important questions that are relevant to us all, even now in the 21st century. I give it 5 out of 5 stars. And I am glad that Richard Dawkins has recommended it to me.