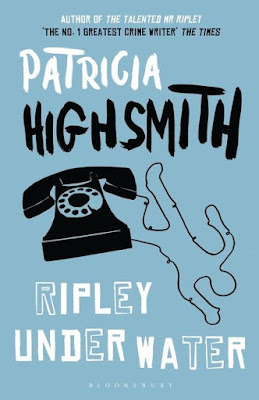 I just finished the fifth and final book of Patricia Highsmith's Ripliad series, centered around the anti-hero Tom Ripley. I read The Talented Mr. Ripley in 2013, followed by Ripley Under Ground in 2014, then Ripley's Game in 2015, and finally, The Boy Who Followed Ripley last year. To wrap it up, I picked up Ripley Under Water, and I must say the energy is starting to fade away.

In this book, Tom Ripley is peacefully living in Villeperce, outside of Paris, when a malicious American couple, David and Janice Pritchard, decides to make his life a living hell. Somehow the Pritchards managed to unearth enough significant dirt about Tom, to the point that it makes Tom uncomfortable. Pritchard starts taking photos of Ripley's house, Pritchard follows Ripley to Tangier while he is on vacation, and Pritchard digs up all the canals around Villeperce trying to unearth a corpse that would be eventually linked back to Tom Ripley.

Somehow, in a 180-degree turn-around, there is almost nothing villainous in Tom Ripley here. Sure, he killed people in the past, but in this book, he actually is an innocent character, who just happens to have a shady past. So if readers found it hard to sympathize and identify with Tom Ripley in previous books, here there is not as much of a cognitive dissonance. As the comments on the back of the book says, Highsmith is playing with the ambiguity of evil. In the current book, Tom Ripley isn't evil anymore, and it becomes really clear that he only commits murder when he really has no choice, and not as an expression of malice, unlike David Pritchard.

Nevertheless I must say that I am not that enthusiastic about this book compared to the first four books in the Ripliad series. I had the impression that Highsmith was losing ideas about Ripley, and the story more or less has ended. She has resorted to creating fantastically irrational people as characters, such as David Pritchard, just in order for the story to move forward. This character is something I would expect in a horror genre, yet this book is supposed to be psychological thriller. Also, the current book heavily relies on material from the previous books, so if you haven't read the previous books, then you will be quite lost reading this one.

In any case, I liked this book, only due to the fact that it has enriched the character profile of Tom Ripley. He has matured, doesn't participate too much in the fast lane anymore, unless some external factor pulls him back in. Come to think of it, this was also the general idea of the fourth book, The Boy Who Followed Ripley. If these external characters don't show up, then I suppose Tom Ripley is content with drinking gin and tonic, chatting with his wife Heloise and his housekeeper, Madame Annette.

I give this book 3 out of 5 stars. It was a page turner, but after reading the first four books in the series, the energy is more or less stale. I suppose I am glad to have read this for the sake of completing the series, but I find it slightly hard to find individual merit for this book.