Book Review: From a Crooked Rib by Nuruddin Farah 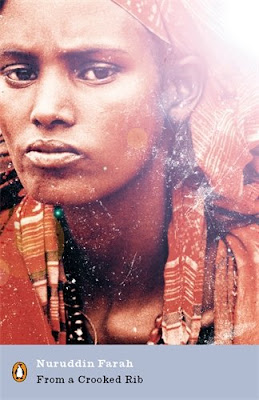 I picked up this book because Nuruddin Farah was an author Salman Rushdie recommended, but unfortunately, I found the book rather lacking, shaky, and rather disappointing. It's a thin book, and I must say it feels incomplete.

See, this book narrates the story of Ebla, a Somali girl from the country. She escapes the country and eventually finds her way to Mogadishu, upon learning that her grandfather sold her to be married to a man she hasn't met before. She seems to have very "modern" ideas given that she is coming from the country. She questions plenty of issues regarding women's rights: she wonders why women are only worth half than men when it comes to cattle, why women can only do certain things but not others, why women deal with goats but men deal with cattle, and so on. So to some extent, she is sensitive to issues of gender equality.

However, her modernity stops there. She still follows her religion, which is Islam. She is superstitious. She believes in plenty of other religious doctrines and dogma. And as an atheist, I find this rather bizarre, why she could go ahead and question plenty of things regarding gender equality, yet she stops questioning religion. If she questions tradition, culture, her whole upbringing, why stop at religion?

In other words, I find the narrative slightly inconsistent and hard to believe. Maybe I just pride myself as someone who tries to be consistent and principled all the time, but I think that Ebla's behavior doesn't make sense. I would expect that she either accepts everything that she is used to, including religion and unequal treatment, or she questions everything. After all, some of the gender inequality that she complains about is the direct result of how her religion views women. Why doesn't she question that?

In any case, I must say that this wasn't the best book I have read. I like the fact that it was written from the perspective of the "native" so to speak. But I should also say that I have encountered books in the past that have done a way better job in narrating a story stemming from Africa from the perspective of the local. Red Strangers by Elspeth Huxley comes to mind.

So yeah, I don't find myself too impressed on this one. Maybe I just had high expectations given that it is a book recommended by an author I admire. But this one just missed the mark, somehow. I give it 2 out of 5 stars.