Book Review: Up Above the World by Paul Bowles 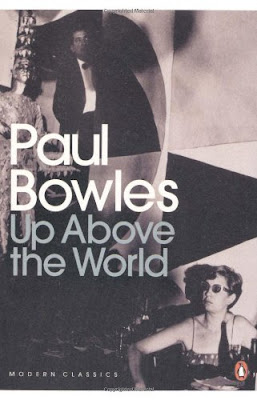 Regular readers of this blog might know that I am a Paul Bowles fan. I've first encountered his novels by reading The Sheltering Sky in 2015. I liked his world enough that I decided to pick up his subsequent novels, reading Let It Come Down and The Spider's House. All three novels were set in North Africa, and involved characters that were not easy to like and sympathize with. These novels were all about existential despair, and for some reason, this topic resonated well with me. So I decided to pick up his final novel, Up Above the World.

I must say that this final novel is a tad different from the previous three. The characters are still not likable: you have the elderly Dr. Taylor Slade together with his wife, Desiree (Day) Slade, vacationing in an unnamed Central American country. The location is now different, but what is similar is that Bowles still places his main characters in exotic locales where they are out of their element. It's not North Africa anymore, but Central America. Instead of the desert, there's the jungle.

Nevertheless, there are things that remain: Bowles still portrays his characters to be snobby bitches, thinking that they are one above the rest. Dr. and Mrs. Slade consider themselves travelers, not tourists. Though to be honest, given what eventually happens to them, they definitely are noobs and could learn a thing or two about traveling and dealing with people in foreign countries.

One thing that makes me scratch my head this time is the presence of a villain, in the form of Grove Soto. This man is a charming and young fellow who befriends the Slades, with nothing but evil in his mind. This I believe is something new: in the previous three novels, there was no real villain per se. The main characters were all destroyed by their environments, and by the fact that they simply were too naive for their own good. This time, there is an actual character in the book who seeks to destroy the two naive and desperate main characters.

I must say that as much as this book has all the signs of being a Bowles novel, it is slightly different from his more popular works, and as such I find it hard to recommend as an introductory book for Bowles. If one wants to begin reading Bowles, I would recommend his other books first. In fact, I would even go as far as saying that this book was a little hard to follow, and I definitely would have a more negative opinion of it if not for the fact that I am already a Bowles fan. There is actually a section in the middle where I was completely thrown off, having a hard time figuring out the continuity of events. Then again maybe Bowles was trying to simulate the effects of amnesia, given that amnesia is a very important plot device in this book.

I am a Bowles fan, and therefore I would still rate this high, giving 4 out of 5 stars. Nevertheless, this is the odd one out, so to speak. I am rating it rather high because it gives me completion, and there's no denying that Bowles' style is very evident in this one. But it takes some background information for one to actually appreciate this book, and therefore it is not as accessible as the others. If you want to read this one, I suggest not picking it up unless you've read one of his other books first.