Book Review: Nazi Literature in the Americas by Roberto Bolaño 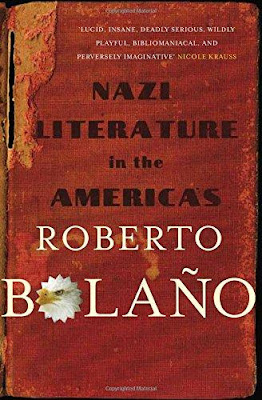 It has been 6 years since I have last read a book by Roberto Bolaño. Ever since I have picked up 2666 in New York City in 2010, I have been fascinated by his writing style. And I am glad that this style that I have come to be fond of is repeated in this current book.

See, this is a novel, but it is stretching its definition quite a bit. Perhaps, it is more appropriate to be called an encyclopedia of an alternative reality. As the title implies, this book is less of a novel with a proper narrative and plot, but more a compendium or encyclopedia of Nazi writers from the Americas and their works. In other words, it is a summary of the pathetic writings of pathetic people with pathetic worldviews.

Bolaño doesn't pull punches here. Every "author" in this compendium is not someone the reader would like. They all end up somehow mentally unstable, weird, psychologically imbalanced, or otherwise someone you would not want to hang out with. And yes, they have right wing Nazi and Fascist views, though it is obvious that their views don't hold water. Bolaño makes it obvious for you.

Bolaño was an anarchist, and had strong left-wing views. This book perhaps makes that obvious. And the interesting thing is that as a reader, it was very easy to read. Perhaps my views are left-wing enough that I found it easy to digest, and I can only simulate in my head how a real Nazi would read such a book. They would probably rate it badly, thinking it was an unfair portrayal.

In any case, I thought it was an interesting literary device. The fictional "authors" definitely blend with the real: there are real literary characters that appear left and right, and Bolaño situates these fictional authors in their midst. I definitely encountered a few new writers, a few new names, that I would want to check out later.

Overall, this was an enjoyable read. It is a short book, and I finished it in 3 days. That's how much I was having fun with it. I give it 5 out of 5 stars.