Book Review: Infinity in the Palm of Her Hand by Gioconda Belli 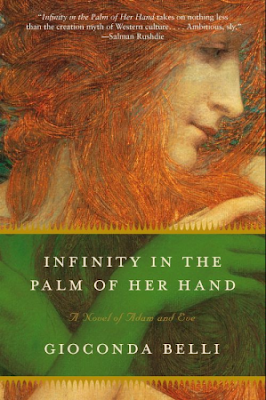 Ah, what a wonderful and mesmerising book!

This novel is a novel about Adam and Eve. See, if you are somehow familiar with the Biblical myth of the first man and woman, you know that this couple is known as Adam and Eve, but if you really read the Bible, you would realise that the Bible doesn't really say a lot about them. The Bible devotes just a few chapters about the first couple, narrating about how they were created, and how they eventually sinned and were therefore banished from the Garden of Eden. But what happens after that? The Bible says that eventually they gave birth to several offspring, most known among them were Cain and Abel, but there really isn't much details. The Bible doesn't really say how they eventually found their way once they were kicked out of the Garden. The Bible didn't really give details how they eventually discovered how sex and childbirth worked. There were many blanks that were just left for the reader to fill. This novel attempts to fill them.

As the author has mentioned in the outset, this is a work of fiction, so there's plenty of imaginative things here. Nevertheless, the author also mentions that this narrative is inspired by the lost books of the Bible, so to speak, the ancient writings that somehow didn't end up in the traditional Biblical canon. As a non-believer, I couldn't care less about this canon, and so I definitely am interested in reading about the myths and legends that somehow got swept into the sidelines.

In any case, I must say that this narrative is very captivating. Its sensuous and svelte character just makes the scenes flow smoothly, and is such a gripping read. Belli after all is a poet, and the words have a style that doesn't really lend to standard prose. The narrative feels more like poetry in prose.

What I want to highlight here is the dynamics between the various characters. Eve is always the one people blame for the reason why humans are imperfect. However, Eve in this book has some very interesting and important arguments. Elokim (God in the book) after all is omniscient, so he knows that Eve would want to eat the fruit of the Tree of Knowledge of Good and Evil. If Elokim really didn't want her to eat the fruit, then why put the tree in the garden in the first place? People say that Elokim (or God) gave his creation free will, but at the same time, it does not make sense that God would give humans free will but punish them if they choose one choice and not the other. If there is a punishment that is attached to one option, such that there is only one other alternative, then that is not free will. In any case, Belli also writes the Biblical events in such a way that if you are a believer, then sooner or later you would want to question your beliefs whether they make sense or not.

Overall I adored this book and have a high regard for it. It is definitely something I would recommend to anyone who might want to challenge their deeply held beliefs. If you are a narrow-minded conservative, then stay away from this book. I give it 5 out of 5 stars.