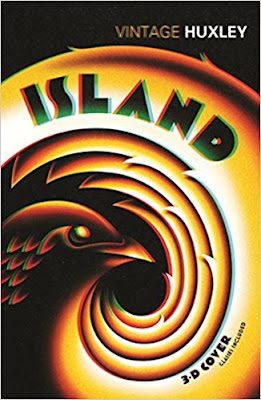 This is such a complex book. I picked it up after reading Brave New World, which is perhaps the most well-known book of Aldous Huxley. However, unlike the former, Island presents not a dystopia, but a utopia, and somehow, it's also a world I don't want to inhabit.

See, Island describes a fictional island country of Pala, set in Southeast Asia. It functions like the world's laboratory. Set in the 1960s, it describes a country isolated from the rest of the world, so all the developments in the Western world in the 1960s were not applicable to this world. And since it's a utopia, it describes a world where Western scientific developments are presented as a negative factor compared to the positive scenario that only happens in Pala.

Now this is where I find myself torn, as I have complex attitudes toward the book. From a purely literary aspect, I liked the fact that there were several elements that occur both in Brave New World as well as in Island, and Huxley brilliantly seesaws between using the same element as a force of evil in the former and a force of good in the latter. I think that was a brilliant move showing evidence of his philosophical prowess and skill in argumentation. For example, in both worlds, drug use was rampant, meant to induce subconscious states of mind, which was a negative thing in the former and a positive thing in the latter. Both worlds featured alternative notions of family, such as group living. Both worlds have artificial methods of conception, as well as massive contraception and rampant sex. There are more examples, but in any case, I really was amazed at the way Huxley used these same devices to argue for both perspectives.

This leads me to conclude that I also don't like the utopian world either. But this is where it gets complicated. In Brave New World, Huxley more or less gave the readers a warning saying that if we don't do anything, our scientific developments would eventually lead to this dystopian world, so we should keep it in check. But in Island, it felt more like Huxley was arguing for the scientific developments of the Western world, because the laboratory of Pala also feels messed up when you deprive it of these aspects.

Or maybe I am reading Huxley wrong. After all, Huxley was immensely interested in parapsychology and philosophical mysticism. He also have extensive documentation of his own experiences with psychedelic drugs. This came to mind while reading the final chapter, as it was a very detailed description of the mental state of the main character after taking the mind-altering substance that is being offered to all the inhabitants of Pala. Part of me wanted to interpret Island as Huxley's justification of the benefits of these drugs, and somehow I feel like that is simply messed up.

Then again, I didn't like the ending, where an enemy kingdom forcefully opened up Pala with the intention of introducing these Western scientific developments, as well as grabbing Pala's oil. So in the end, Pala's cocooned existence is destroyed, and Pala becomes aligned with the rest of the world. This scene reminds me of the way the United States led by Commodore Matthew Perry forcefully opened up Japan, which resulted in Japan ending its policy of isolation, which ushered in the modern era. As this is an example of a violation of self-determination, I don't think I can easily say that I agree with it.

So yes, I find myself thinking about this book further beyond reading it, and it doesn't result in a clear opinion. I'll take that as a good sign, a sign that this book is quite complex and multi-layered, with many facets to touch upon. It definitely makes the reader think, as it has done to me. I give it 4 out of 5 stars.