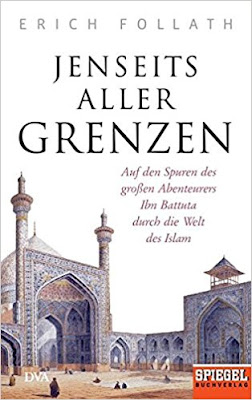 Ibn Battuta was an unknown historical character for me. So when I saw this book, written by a reporter who decided to take a long-term travelling stint visiting a dozen cities around the world where Ibn Battuta has visited back in the 14th century, then I decided to pick it up. It turned out to be a very interesting and knowledgeable read.

See, I did know that Ibn Battuta once existed. But beyond that, and beyond the fact that he was a Moroccan explorer who went to places where people of his time typically didn't go, I didn't know much. So this book provided me the pieces that were lacking. It also provided me with some cultural insights with the way things went during the 14th century. I found myself fascinated with the way people travelled back then, as the author made comparisons with what exactly was backpacking back then as opposed to travelling in style. It definitely is a very different definition compared to what we have nowadays.

As a reporter, I found Erich Follath giving very objective and factual, though at times dry, narratives. Every chapter (corresponding to one city) has a part which he describes the trip of Ibn Battuta, and additionally has a part which tells the reader of Follath's experiences during his visit. Follath is a well-travelled individual. He has travelled to places back when he was a student, as well as when he was on assignment as a reporter. Perhaps that is why, but he focuses more on places that typical travellers don't go to. For example, the Rubbish Island in the Maldives. It provides an interesting nuance to one's perception of these destinations.

One thing that I didn't quite get, and this is perhaps more due to my lack of firm grasp in the German language, is Follath's attitude toward Islam. I at times found him excusing him, as he was saying that religions like Islam aren't to blame for the bad things that happen in this world, as there are more bad incidents in history that are caused by non-religious means than not. But religion doesn't have to take first place. Just because Hitler's Holocaust or Mao's Great Leap Forward wasn't religiously driven doesn't mean that we shouldn't be worried when religion is a driving factor behind terrorism fueled by religious fanaticism. Fanaticism is an enemy, and religion takes a very prominent form when it comes to that.

Every now and then I get the feeling that Follath supports moderate Islam, and he does spend time highlighting how there are examples around the world of multiple religious co-existence. That's great, but if you really dive deep into religion, you will see that no matter how moderate things might look like, there's nevertheless the fundamental thinking that "I am better than you, because when Armageddon comes you'll perish". This thinking, along the lines of "My imaginary friend is better than your imaginary friend" is always going to be an open door that would lead to fanaticism. No matter how moderate one could be, it will always lead to more radical ways of interpreting one's holy book. And it doesn't matter whether religion has been reformed or not, whether there exists a Martin Luther in one's religious history or not, there will always be radical versions of it, which will lead to problems.

So, instead of celebrating moderate religion, why not support more efforts that support rational thought, science, critical thinking and scepticism, so that eventually people see that science works, and hopefully, more and more go away from religion?

In any case, I liked the fact that this book opened some places that were previously unknown to me. Perhaps I'd go there too, one of these days. I give this book 3 out of 5 stars. It's an interesting read if you're looking for non-fiction.