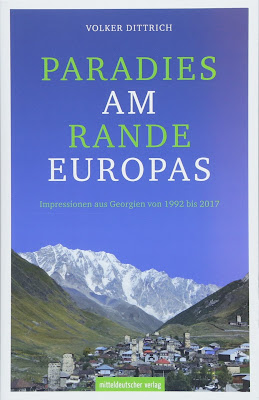 This book was quite an interesting and captivating read. Volker Dittrich is a journalist who has been visiting Georgia several times since 1992. Indeed, this book is a collection of his impressions about this country from his visits between 1992 and 2017. And unlike other travelogues I have read, this one was different, rather objective, and not very romanticised.

Perhaps it's because the author is a journalist. Other travelogue writers tend to be these young folks, thinking they could be amusing by publishing essentially their (mis)adventures while making a fool of themselves in a foreign country. But Dittrich doesn't do that. He has a serious tone, more along the lines of a documentary, chronicling the lives of Georgians from the time the country opened up after the dissolution of the Soviet Union, to now, when tourism is such a massive force in the Georgian economy. Plenty of things have changed, and this book does a great job in showing how things have evolved.

I think I actually like Dittrich's way of travel. From his numerous visits to Georgia during these years, it seems that there isn't a corner of the country that he hasn't visited before. I've only visited a small part of the country, in 2013, but the author has been to Georgia both before and after I have been there. It reminds me of the snippets of Georgia that I have seen: Tbilisi, Sighnaghi, Davit Gareja Monastery, Kazbegi, and many others. I think the author has been to all of the places I have visited myself. And more. It seems that the author does more than just scratch the surface, which is a travel strategy I have been trying to implement lately.

I also like the objectivity of his narratives. There are positive things and not so positive things about Georgia, its land, and its people. And Dittrich writes about them all, without embellishment. I thought that was quite a straight-forward and refreshing way of narrating one's experiences.

Overall, I liked the coverage of this book. He has written not only about the things one can see when travelling around the area, but also the culture, the lifestyle, the traditions of the people inhabiting this paradise on the edge of Europe. I definitely would recommend this to anyone looking for a decent travelogue to read. I give it 4 out of 5 stars.