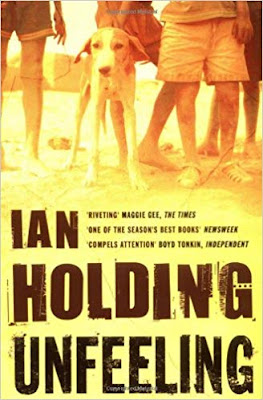 I am not sure I liked this book. See, I picked this novel because I was looking for a book written by an author that comes from a country which was new for me. I at some point realised how most of the books I was reading were from American or British authors, so I wanted to diversify. Hence, I came across this book, since the author is from Zimbabwe.

The plot revolves around the controversial land reform that happened in Zimbabwe. The narrative focuses on Davey, a teenage boy who becomes orphaned because his parents (who were farmers and owned a big chunk of land) were killed by gangs employed by a "fat black woman" who took over their land. Of course, Davey is traumatised. At the same time, the story also focuses on the efforts of the other white families surrounding Davey on coping.

And somehow, I find this story very hard to relate. I am afraid that I am misunderstanding the author's intent, but in any case, I found it very hard to sympathise with the story's protagonist and the society he is embedded in.

See, the thing is, Davey and his society are essentially white supremacists. They belong to the white minority in Zimbabwe, who even though they only constituted 8% of the population during their heyday, they enjoyed significant privileges both politically and economically compared to the black population. The white farmers had land, servants, and plenty of other social privileges. This was reflected in the way they interacted with the black "locals" and I am sorry to say but I cannot just identify with that. So when this minority white supremacist gets butchered by a gang of black thugs, I cannot get my heart strings pulled and sympathise.

As I was reading this, it reminded me of the Republican conservatives in the USA, or the far-right rural inhabitants of Europe. It's almost like this book is written in that perspective, with conservatives moaning how asylum seekers are knocking at their doors, raping their children, and stealing their land. And even if I don't go the hypothetical route, and instead go to the historical route instead, what was happening to Davey's family was exactly the same that happened in the multitudes of families of black Africans when the white colonisers stepped to the continent. I definitely cannot shake off the image of Cecil Rhodes who wanted to build a connection from Cairo to Cape Town, in order for the Anglo-Saxon race to thrive above the rest.

So yeah, as much as the novel was rather gripping, when taking the context into consideration, I fail to be moved, and overall, I didn't have a positive impression of the book. I felt like this book was written for white Conservative right-wing readers. As an Asian living in a European country, it failed to connect with me. I give it 2 out of 5 stars.