Book Review: God is not Great by Christopher Hitchens 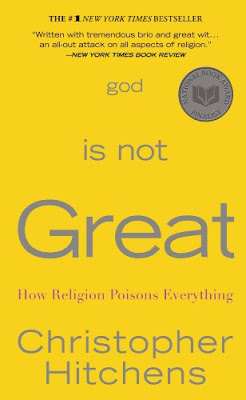 Man, this book hits you in the head. If you're a religious apologist, then perhaps this book would negate all arguments you have defending religion. By the end of the book, it's probably crystal clear that religion actually does more harm than good.

Anyway, for me, this book was preaching to the choir. After all, I have lost my belief in god and religion a long time ago, more than a decade in fact, and every other piece of information I encounter just strengthens that conviction of mine that believing in god is an irrational choice. Nevertheless, it's useful to read a refresher every now and then, and this book serves that purpose.

See, in this book, Hitchens goes through almost every major religion on the planet, and argues how these religious beliefs have been more a force of evil than good. And it even goes beyond my current more moderate stand that while religion is not for me, I can see why religion can be beneficial for others. No, Hitchens goes more radical than that. And I must say, his arguments are quite strong.

I won't repeat his arguments here. I don't intend to summarise it. But what I would say is this: if you are a person who cherishes your faith, and think that your faith is strong, and believes that you are truly right in thinking that having your religious belief is the correct choice, then this book should be a challenge. If your faith can stand to this book, then I am impressed. Of course, there's the religious argument that god "shouldn't be put to the test". Alas, most religious arguments are not testable, though people are dying left and right because of it.

One thing I didn't like, however, is that Hitchens can sometimes be very forceful in his tone, that it can be borderline rude. Some passages look like name-callings, which, as much as religion is a ridiculous and laughable set of beliefs, the people still deserve respect. I would poke holes on Islam, but I still respect the people who just happens to believe this ridiculous set of beliefs. I would do everything to debunk Islam, but I wouldn't resort to name-calling the people who unfortunately believe in this set of beliefs. This is where Hitchens and I differ.

In any case, I still think it is worth a read. Try it out, and see how strong your faith is. Or if you are a non-believer like me, then this might be useful as it provides additional ammunition to strengthen your non-belief. I give it 4 out of 5 stars.