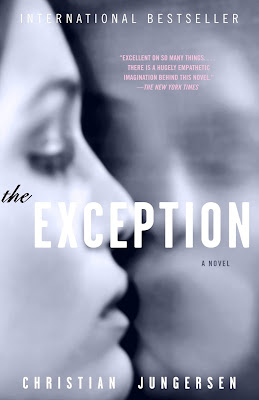 I am ambivalent when it comes to this book. It is 500 pages long, and for the first 250 pages, I was more or less bored. And then it picked up, and upon completing it, I felt like all the action was condensed in the last 75 pages of the book. Coming out of it at the other end, I felt like someone just whacked my head giving me a headache, and I am still whirling around, not knowing what exactly happened, while I see stars.

See, this is the store of four women who work in a non-profit, a genocide research centre, to be precise. There's Iben, who had a hostage experience in Africa; Malene, who is suffering from early-onset arthritis; Camilla, who seems to have a murky past involving an ex-boyfriend; and Anne-Lise, the quiet secretary who is being bullied by the other women. In the beginning, three of the women receive a threatening email from an unknown sender, and even though they initially thought that the sender is a war criminal from Serbia they have once written about, they end up ganging up on Anne-Lise, accusing her of the email threats.

The first 250 pages was mostly office banter and gossip, and frankly speaking, I didn't feel too motivated to read about high school behaviour. I see some of these behaviour in real life in my work environment as well, so for me, reading about the childish antics of two women targeted against a third isn't the most gripping read.

And then suddenly, things happen. Characters start acting like they have duplicate personalities, all of them. All of them have secrets that slowly (though perhaps a little too late) the book reveals, making the story slightly exciting again. So previous hypotheses regarding who sent the emails were then revised, rewritten, and reassessed.

Anyway, in the end, things come to a close. There is a cliffhanger, a lingering possibility that the ending that was provided might not be the complete picture, but let's leave it at that. I feel like I am done with the story and couldn't care less which version was exactly the truth.

One thing I liked about the book is its dissection of the psychology of evil. This theory that people who committed atrocious crimes like the Holocaust can be superbly cruel at one point and then return to their homes and be a loving parent is provided a psychological explanation. Evil people are not mentally ill. Rather, all of us can have the possibility to be evil, and it all depends on the situation we find ourselves in.

I give this book 3 stars. You might enjoy it, you might not. I was bored at times, but I also found myself breezing through some of the sections. If you miss this book, you're not missing too much.