A Weekend in Amsterdam: Bolenius*

It's been awhile since I have been to a Michelin-starred restaurant. The last time I was in one was during the Spring of last year, when I was in Luxembourg for work-related reasons and dined in Clairefontaine*. So when I was in Amsterdam for a weekend, I decided to take this opportunity and make a reservation for Bolenius*. I was quite excited about it.

The restaurant is located in Amsterdam Zuid, which was easily reachable by the trains. I headed there and found the restaurant easily. I entered and was seated promptly. It has a modern vibe to it, and therefore I was also expecting modern twists when it comes to the food.

They seated me on a large table, but it was large enough to put a divider in the middle, so I had my privacy. There were three people sitting on the other end of the table, but for all intents and purposes, I definitely didn't feel like I was intruding. The place was dark, but apparently that was part of the atmosphere. Once the food started arriving, the light became brighter, putting focus on the food in front of you. 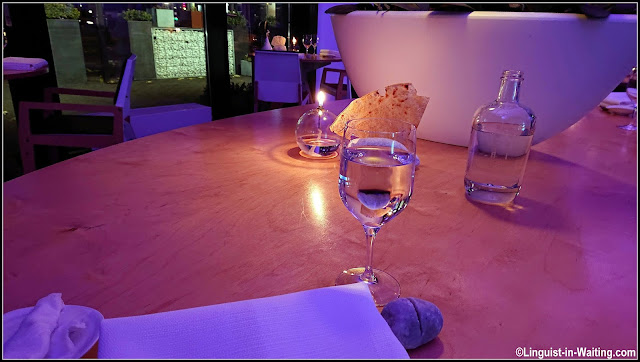 I opted for the 7 course tasting menu, with juice pairing. And in the beginning, they set the table up with very interesting little pieces: containers of liquids, rocks that hold flatbreads, among other things. 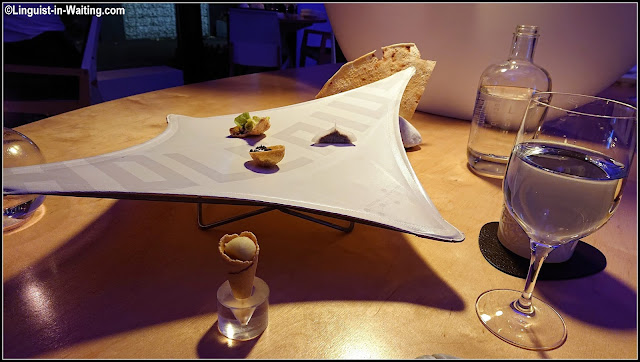 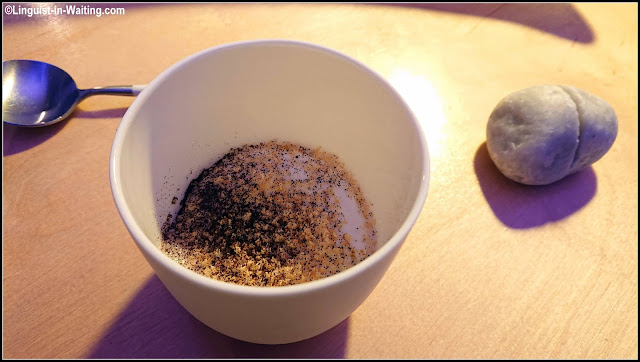 As expected, there are a few little goodies that the kitchen has sent in the beginning. Some of it appeared on a very fancy and modern-looking plate. 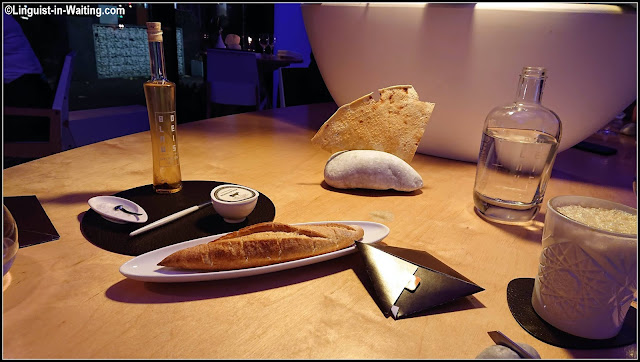 After that, the table was set and was ready for the 7 courses to be delivered. I even got a letter in an envelope! 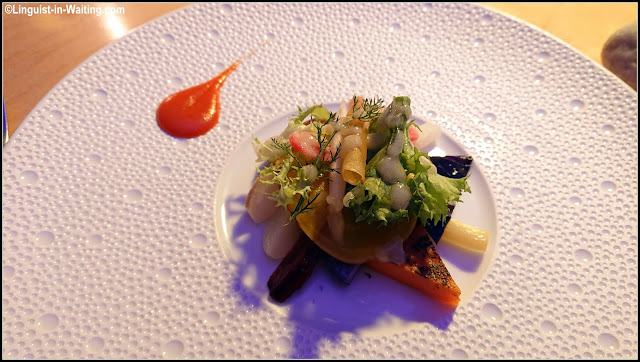 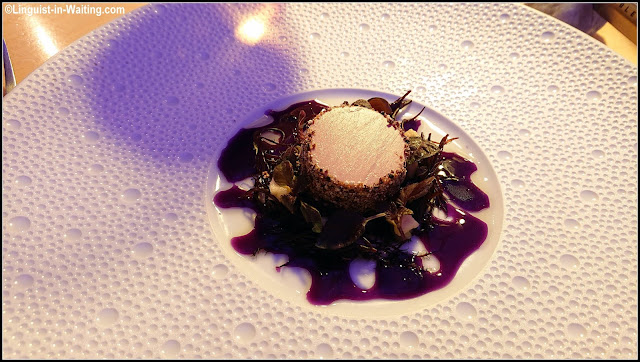 The next dish was fake foie, together with red cabbage, apple, and seaweed. The foie was fake, in the sense that it didn't come from a force-fed duck's liver. The duck naturally died, and the fat was just later mixed with the liver in a laboratory. I must say, if they didn't tell that to me, I would not have noticed. I am amazed that they can deliver these dishes in a way that is less cruel to animals. 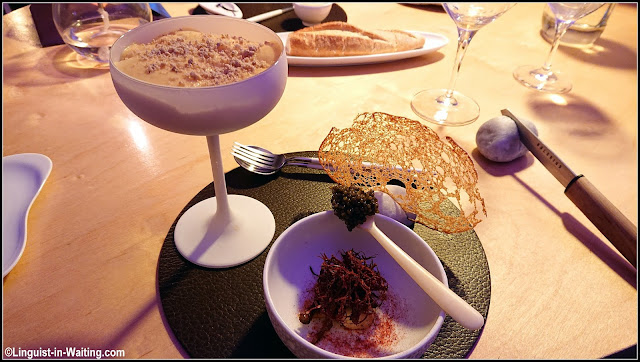 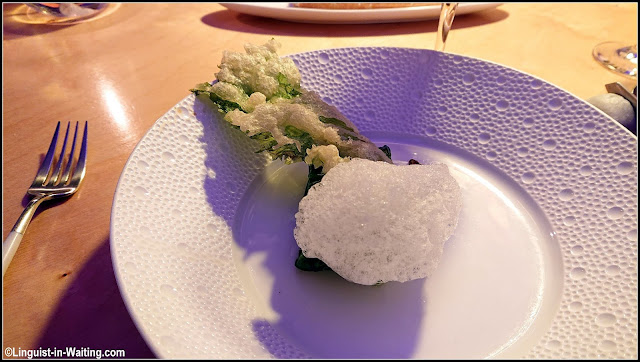 Two seafood dishes came next. The first one was mussels, with pears, pumpkin, and mushroom. The second one was halibut, with fish gravy, escarole, and beer batter. Both seafood dishes were stellar, and presented in a very interesting way as well. 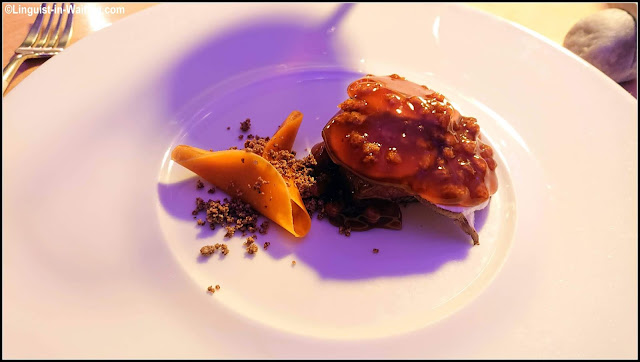 The next dish was deer, and was definitely a highlight. 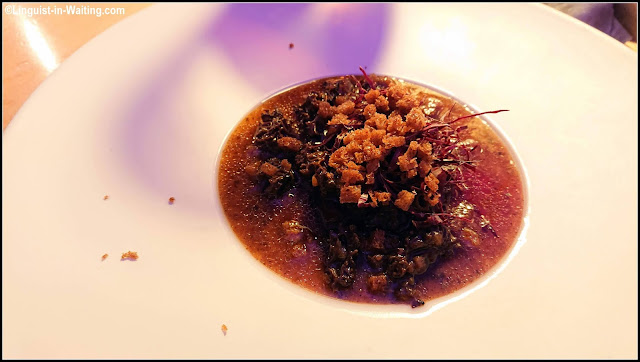 The sixth course was interesting. It was a beetroot baked within clay, presented together with morrels. In fact, when it was served, they rolled out a tray, and on it was the clay that was in the oven for a while. They then used tools to crack open the clay, right in front of me. They then prepared the beetroot, by freeing it from the clay, peeling it in front of me, and presenting it on a plate. I asked them why they positioned a vegetable dish this late in the course, and they said that they wanted to have a tapering effect on the menu: heavier items were placed in the middle and not in the end, and the tail-end of the course slowly wraps things up. 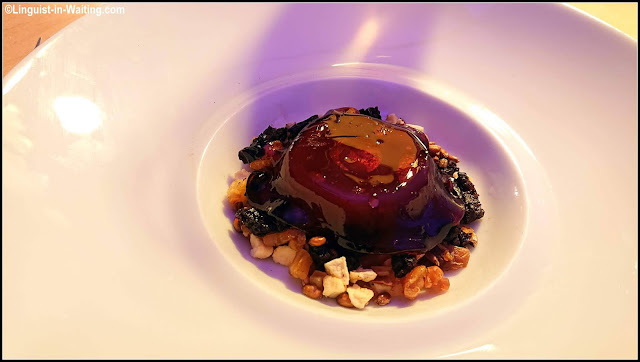 Finally, they served me dessert, which was composed of candied fruits, some nuts, and sweet jelly. It was subdued, modern, and a great finish to the meal.

I was chatting with the servers during the night. They made the event definitely very enjoyable. I was also impressed with the juice pairings, which I thought was well-thought through. At some point, they even paired a lap sang sou chong tea on one of the courses. I must say this was indeed an experience, and something that I would remember for a while.