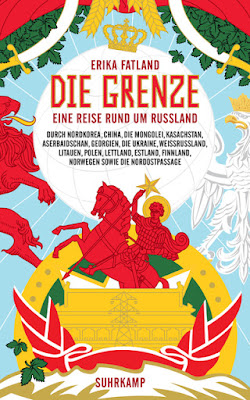 Perhaps I haven't enjoyed a travelogue as much as this book. The thing is, in case it hasn't been obvious before, but for every 3 English books I read, I read a book in German. And for the most part, I have been picking up travelogues written in German by German writers. That has been my rule for the past couple of years, mostly because this genre is the easiest to read for a non-native speaker like me: it's easier to visualise concrete concepts relating to travel, compared to abstract concepts in fiction.

Anyway, at some point I picked up this book, which turned out to be an exception to my rule. Until now I have been avoiding travelogues in translation: I figured I'd prioritise books that were written in the German original. A pure overlook caused me to pick this book up, not knowing that the author originally wrote the manuscript in Norwegian, and that the version I had in my hand was just a translation. Oh well, in any case, I kept an open mind. And I must say, I am glad that I did.

This book is not really a travelogue in the typical sense of the word. The author did spend months and month encircling Russia, travelling through the countries which share a border with Russia, as well as on a sea voyage aboard a vessel that sailed through the Northeast Passage, from the Russian Far East in Anadyr to Murmansk in the Kola Peninsula. And the book was less about the author's experiences, but more about the stories of these neighbouring countries and their peoples as they exist as Russia's neighbour.

This book is filled with histories of the various tragedies that happened, the various wars that resulted in the current state of the border, the numerous policies that have been enacted to the peoples that were living in and around the Russian Empire, the Soviet Union, and the Russian Federation. As the author travelled by land and sea from Asia to Europe, beginning in North Korea all the way to Norway, she examines how the lives of the peoples she has met have been changed in the context of living as a neighbour to the world's largest country.

I must say that this book is well-researched, and even though I see it more as a historical book and less as a travelogue, it still kept me turning the pages, and I would even say that this book is gripping. I have learned plenty of things about Russian history as well as the history of the surrounding lands by reading this book. Things that I normally would not encounter in the course of my standard education were presented in a very accessible and interesting way in this book.

So yes, I would recommend this. Erika Fatland is one adventurer, and one would learn a lot by reading what she says in this tome. I give this book 5 out of 5 stars.