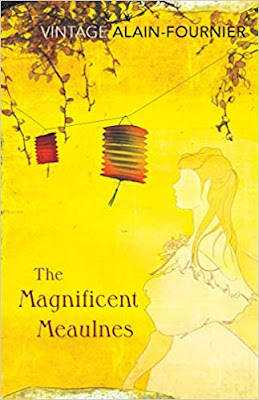 I happen to have picked up this book, not because I have been catching up on my required French literature reading (I learned that most French schoolchildren would be required to read this book by the time they were 11 or 12 years old), but because this book happens to be mentioned several times in David Mitchell's novels, of which I am a big fan of. So one time I felt curious, and therefore I put it in my reading list.

This is a slim book, just clocking a little over 200 pages. It's a coming-of-age novel, featuring the life of 17-year-old Augustin Meaulnes, as narrated by 15-year-old François Seurel. The title is rather tricky to translate (think The Great Gatsby), which refers to the protagonist, who is grand in literal and figurative ways. In the beginning, he's grand in size: compared to the other schoolboys which he mingles with, his tallness and attitude definitely sets him apart. And in the end, he's also grand in sentiment and character: his deeds would make one think that he has done the ultimate sacrifice for a loved one.

This is definitely a novel that has plenty of layers. The reader can wallow in the various nuances that exist between the different characters which have numerous conflicts against each other. It is indeed a great literary exercise figuring out the driving force of each of the different characters. But perhaps for a late-30s reader in the 21st-century, there's a part of this that makes me feel that I couldn't care less.

See, honour plays a big part in this book. There's this concept of honour, promises, and the importance of holding on to them and fulfilling them, even if these promises have been made epochs ago, and no matter how childish the contexts of these promises might have been. In this book, it seems that fulfilling one's promise is given utmost importance, no matter how much damage such fulfilment might cause the people around oneself. And that just makes me scratch my head, truthfully stated.

There's also the aspect where the narrative makes me feel that the events portrayed are just too puerile, and I couldn't care less about. There's a big part of the narrative that focuses about the interactions between adolescents, and this is just the bizarre age group where you're not a child anymore, yet you're also not yet a full-blown adult. You want to act and feel and be treated like you're not juvenile anymore, yet when push comes to shove, you still don't have the oomph. And somehow, I didn't feel too interested about that.

In any case, I do appreciate that this novel sent me back a few decades back, and this book definitely reveals the sentiments that are appreciated and valued back in the early 20th-century. I can see why this would be required reading for students, but beyond it being a literary exercise, I feel like there are other books out there that would be gripping. Nevertheless, I give this 4 out of 5 stars.