A Weekend in Hamburg: Petit Amour*

It's been awhile since I have been to a Michelin-starred restaurant. The last time I was in one was in autumn of last year, when I spent a brief weekend in Amsterdam and dined in Bolenius*. So this time, since it was my birthday weekend, we made it a point to make a reservation in a Michelin-starred restaurant in Hamburg. We opted to go to Petit Amour*, and yes, we were quite excited about it.

The restaurant is located in Altona, just a few minutes walk from the eponymous train station. The area is not the nicest, given that it's a shopping area with rather heavy foot traffic and the occasional junkie, yet the restaurant is actually in a very quiet square that somehow is shielded from all of the not so nice elements of the neighbourhood. We had an early reservation, so we had the choice to sit wherever we wanted. We chose a quiet area of the restaurant and made ourselves comfortable. 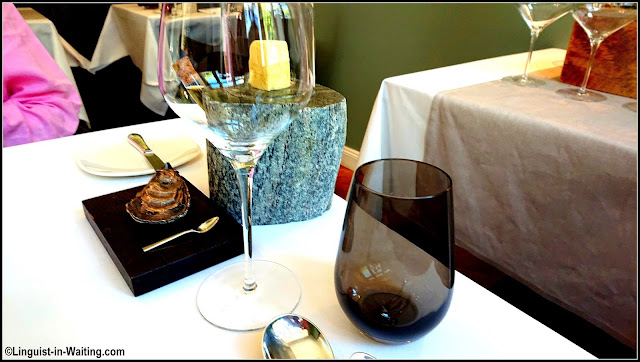 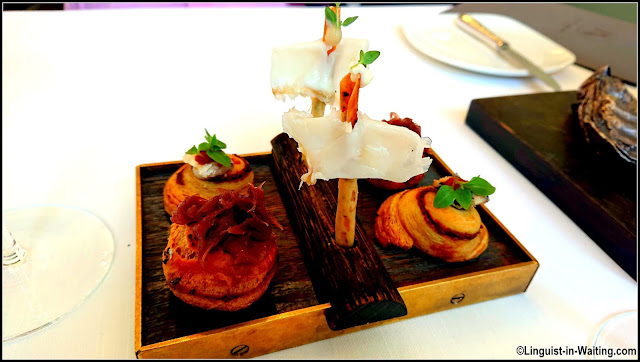 After we were seated, the service began promptly, yet friendly. The table was set in a very elegant yet creative way, as you can see above. And immediately, we were given little nibbles to start with. I must say that they took great care of us, even incorporating the fact that one of us didn't like dairy products. The little nibbles you see above involve bread and meat pieces that were wonderfully crafted together. 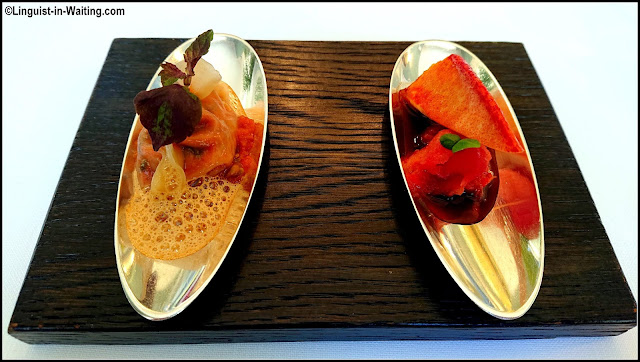 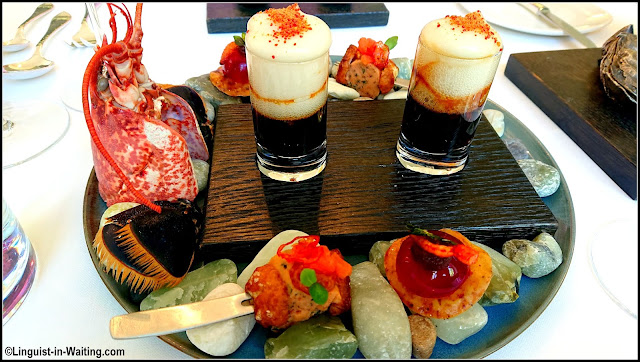 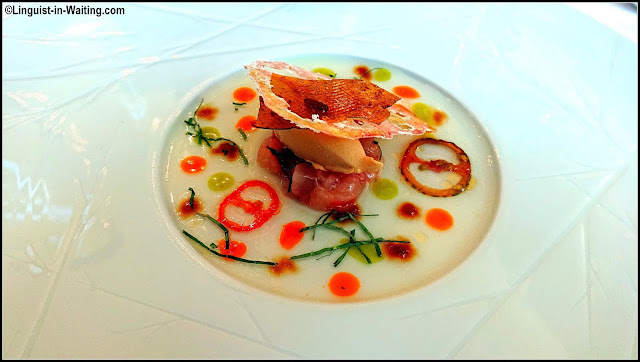 The first of the seven courses that were to come that evening was the Amuse Bouche, consisting of multiple variations of tomato and lobster from Brittany. There were several parts to this course, delivered in stages. There was a dumpling, as well as a spherified soup, both positioned on fancy spoons, meant to be eaten in one bite. There was a foamy soup in a shot glass, as well as some finger food. And there was a cold plate consisting of again tomatoes as well as lobster, in various different forms, including crisps. This course shows how creative one can be, all the time just using two main ingredients, tomatoes and lobsters. 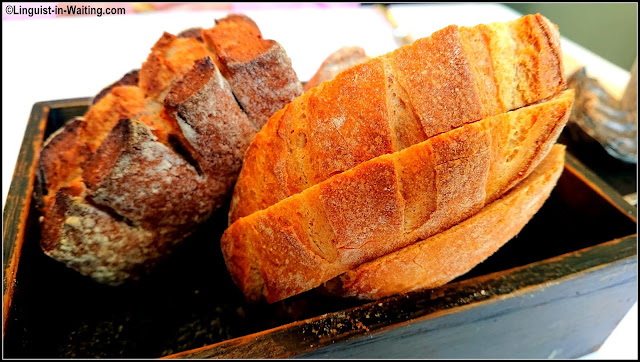 And then they gave us bread. This was fancy bread, I tell you. 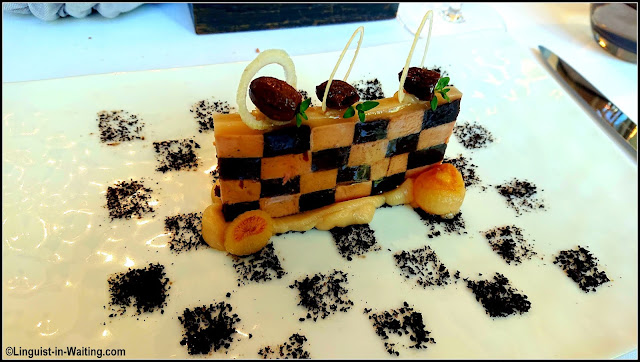 The next course was a fantastic terrine of foie gras as well as olives, paired with caramelised onions as well as a brioche with thyme. I must say the visual impact of this course was very high. 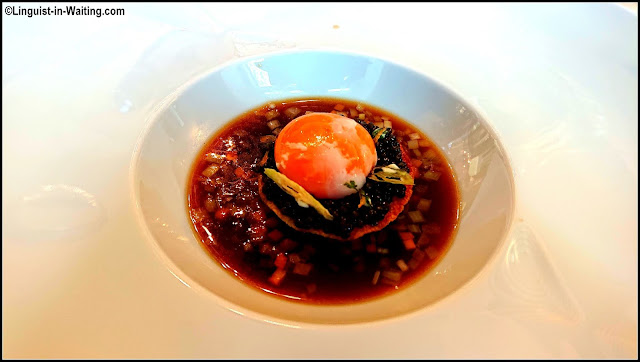 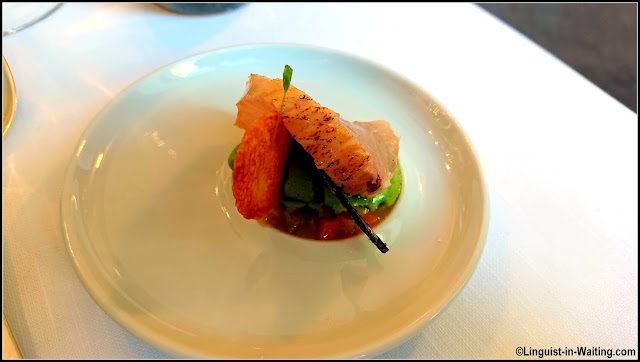 And then we were given two plates: the larger one contained an egg yolk confit swimming in an essence of mackerel, together with some caviar. Additionally, on the side we were given some slices of mackerel to go with it. The egg yolk was rather mind-blowing I must say. 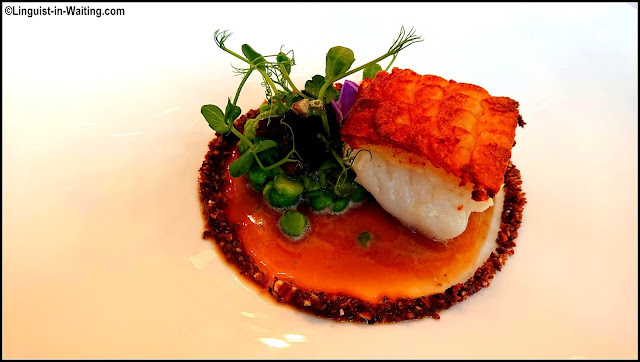 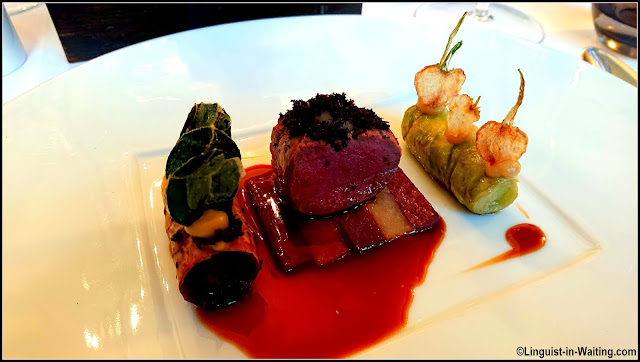 The next two courses are the main dishes of the course, so to speak. The first one is turbot, with "skin" recreated using finely sliced potatoes, and paired with young vegetables. Then there is the deer, paired with pepper cannelloni and pointed white cabbage. Elegance is the keyword here. As much as these are the "heavy" plates, they weren't heavy in taste, and has a very high-level elegance to it. 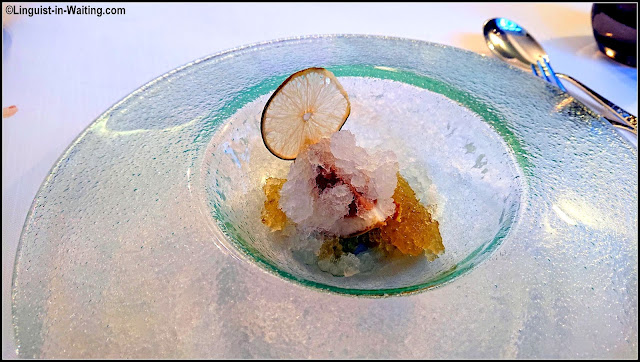 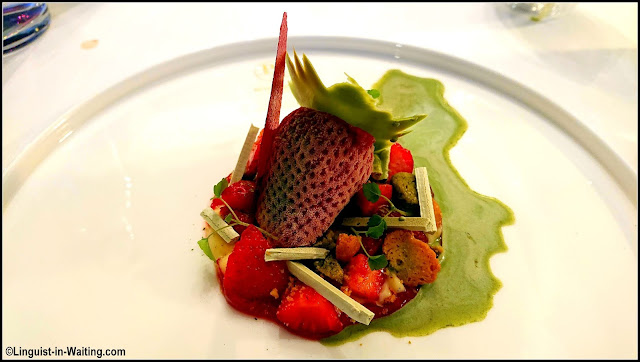 We opted not to take the cheese. So we received the pre-dessert, a citrus sherbet concoction, designed to rinse the palate of the previous flavours and prepare it for dessert, which was matcha and sweet strawberries in its various forms. The large strawberry looking thing above is actually not strawberry, but ice cream in strawberry form. 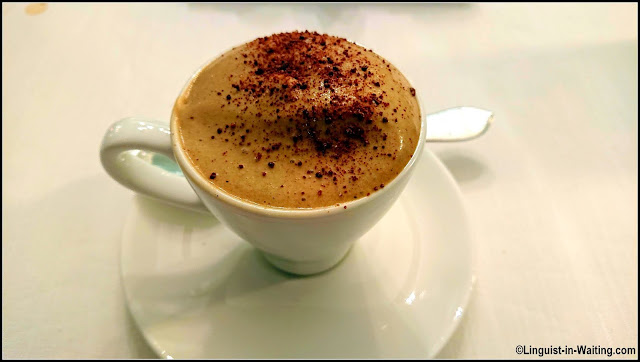 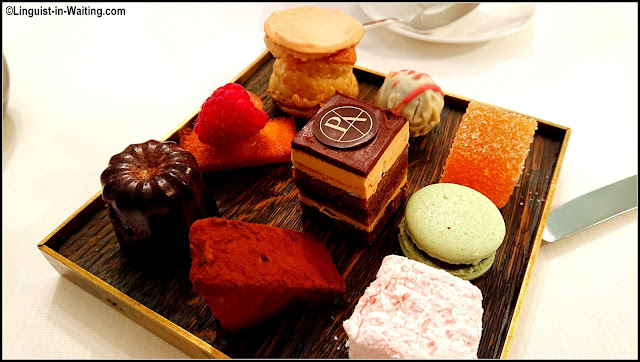 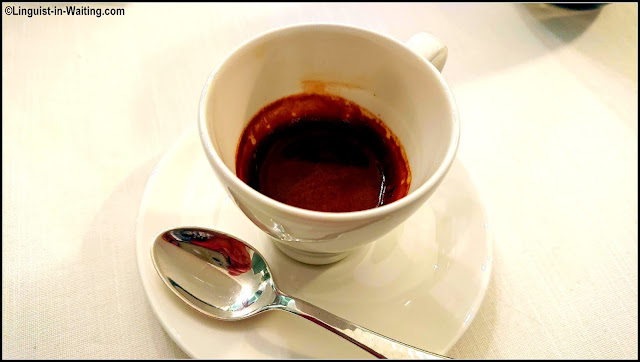 Finally, it was time for coffee. In any case, they showered us with further sweets, in the form of petits fours, as well as a small chocolate and coffee mousse in a small cup. Yes, we were given a small knife to split things between the two of us, if we wanted to. And the small espresso I ordered to wrap things up was definitely quite appropriate.

I have to say, that as much as I enjoyed the other Michelin-starred restaurants that I have been to, this one was the most visually memorable. The visual impact of these dishes were rather high, which adds to the level of enjoyment one gets. It isn't just tasty, it was also very good looking. I definitely enjoyed this evening, and even though this turned out to be the most expensive meal I have ever paid for in my life, it was in my opinion quite worth it. I wouldn't come back here too often, yet when I want to celebrate, this would be something I would consider again.