As I observe and gawk at the different Christmas decorations here in Buffalo, I have noticed that sometimes the things they put on their lawns simply do not make sense.

Of course, there is the perennial Santa.

And then the candy canes. And the snowmen.

And of course, the animals.

Who would forget the reindeer? A house in my street even has a moving reindeer, the neck and head goes up and down, as if it is grazing on the house's lawn.

But there are other animals that seems to be out of place.

Animals like a polar bear (ok, I could infer a connection to this), giraffe, and here's the best one, a giant frog. I've seen decorations, blown-up balloons, and other lighted stuff featuring these animals in people's lawns this year.

Anyway, like other people have said, the Holidays has been reduced to its commerical value. If a frog can be lighted, and if it sells, then you'll see them in people's lawns.

Oh well, let me share the third picture for my Inverted Darkness Series. This is actually a picture of Hayes Hall, a building in South Campus, in the middle of the night. 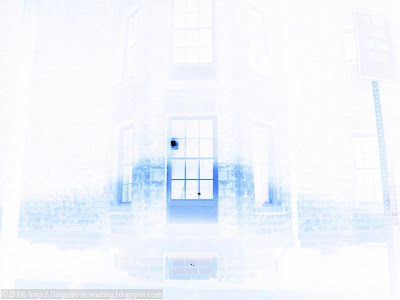