It is still cold. And yet April is already 25% over. I cannot believe that I moved to a place that sees 6 months of cold weather. Come to think of it, cold weather for this year began on October 12, when that freak snowstorm thundered its way here in Western New York, and snapped all the trees and caused the power lines to break, leaving the whole area powerless for about a week.

And now, after 6 months, it is still cold.

But then again, I think I'd prefer this weather over the sweltering heat in Manila, when my handkerchief would be soaked in sweat every day.

Yesterday, as I was riding the bus home, I overheard a conversation between two college dudes. I hated it. You see these two possibly underage (meaning, under 21 and therefore still cannot drink legally) males, talking about their Johnny Walker Whiskeys. They have an air that I didn't like, they were talking how one guy's birthday present, a Johnny Walker Blue Label, was the best birthday present he ever got. How the different colors of Johnny Walker reflect in the pricing. How it is expensive to drink a shot of the Blue Label. Wow. These two 20-yr olds seem to act like they are expert whiskey connoisseurs. It seemed that their world revolved around that bottle of whiskey. And boy they are enthusiastic about relating it. They seem to make it sound like a chemistry class, how a bottle of whiskey is equivalent to 22 shots, and water is a bad chaser, and how many ounces are in a shot, et cetera. I cannot believe how shallow these people are, with their glazed eyes, seeing that the only currency they recognize is alcohol.

I have another surreal thing to report. Yesterday, out of boredom, I Googled myself. I then was lead to an abstract of a paper, apparently, an abstract of a paper that will be presented at a conference that I will not be attending. But apparently, my name was in the abstract. Then, it turned out that the authors are quoting me! Apparently, a paper I wrote two years ago was cited in this abstract, and there it is, my paper, in the bibliography. Wow. I never expected me to be quoted by others, let alone be published. Oh well, shallow as it may seem, these little things actually motivate me to excel and push forward, and do good in my research.

The other day, I watched a pretty good comedy movie. I watched Night at the Museum with Ben Stiller. I found it hilarious, and there I was, in my apartment, laughing as I was watching this flick.

So before I go, let me post another of my Lackawanna Basilica Series. This is the elaborate altar, and the marble-laden steps. Enjoy. 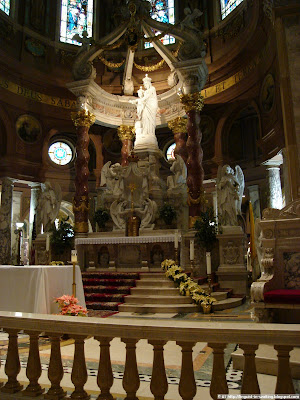