I had another bout of insomnia last night, so I was finally able to go to sleep around 3:00 AM. Because of that, I woke up real bad. I was woken up by the daylight, around 6:30 AM. But I wanted to go back to sleep because my head felt like it was being split in two. So I pulled the covers and went back to sleep, albeit very lightly.

Some good news. I think I have found a roommate for my apartment in Buffalo. I posted an ad online, and someone replied. Actually, three already replied, but the first one seemed the best choice. We are still emailing each other back and forth, but it seems that the deal will come through. He is also a graduate student in the same university, starting this Fall, so that makes things simpler.

Today I went to the supermarket to buy some stuff that would be needed here in the house, like dog food. I also bought some ingredients for the last meal that I would be cooking.

While in the supermarket, I saw this (noveau-)rich family, complete with a maid, doing their grocery shopping. The mom was talking to her son, in English. Oh I so hate that. Then she talks to her husband in Tagalog. The child thus fails to learn the native language.

During my trips to the university here, I sometimes encountered a student in the department, who speaks only English. When he was asking something about my experiment, he asked me in English. I replied in Tagalog. Why would I speak in a foreign tongue to a fellow countryman? How absurd!

There is a graduate student in Buffalo, also from the Philippines, who has a wife and child. They talk to the kid in English. Why? In one way or the other, the child will learn English. I do not deny that English is one of the major lingua francas in the world right now. And there is nothing wrong in using it. However, sometimes their use will then obliterate the existence of other languages.

Some linguists just sit back and do nothing about this. They say that I shouldn't be a purist and go against the natural course of the world. But for me, it is diversity and preservation that is important. Some people here are against inventing new words for new terms, saying that it is like putting the language in an ivory tower. For them, it would be easier to borrow the term than invent one.

But the Japanese were comfortable with inventing a new term. When the telephone was invented by Bell, they coined the term "electric conversation" which is the literal meaning of the characters they use for "telephone". What's wrong with inventing new words so that the language would be modernized?

I guess that's where politics comes in. The issue of the medium of instruction here in the Philippines has come and gone. That's why I shun applied linguistics. There's too much politics in the field. And nothing has been done for the benefit of the people. Studies have proven that children learn better if taught in their native language. But there are still subjects in grade school that are taught in English, and not the native language. No wonder we trail behind.

Ok, enough of the soapbox. My head is reeling already. But then, that may be the result of the homemade coke-and-rhum that I mixed for myself. I didn't want to give away this half-empty bottle of rhum, so I bought some coke and lemons, and made myself a Cuba Libre. I guess it will also do me good, since I am getting a bit drowsy now.

Ok, here's another of my Old Fort Niagara Series. Here is the grand dining hall inside the fort. They apparently used this room as a meeting room as well. Enjoy. 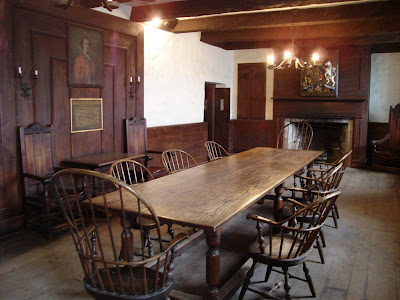