Some good news first: I think I’ve found a roommate.

A friend of mine referred someone to me a week ago. He is a new guy that will be starting graduate school this Fall. And he comes from the Philippines as well. But the thing is, when my friend referred him to me, I already was entertaining some other prospective roommates. However, it seemed that those people didn’t work out, so I contacted this one.

We emailed each other, and one night found each other online, so we chatted. It was actually weird that we might have bumped into each other while I was there in Manila, because I was in the same campus as he was. Anyway, so yeah, I guess he will be my new roommate. And somehow I am not frightened, nor am I dreading that thought. Unlike two years ago, when I had that slob of a Japanese guy as a roommate. When every other entry in this blog was a complaint about him.

Anyway, so that is settled. I already gave him my phone number and address. And tentatively he will be coming here around the middle of August. So I guess I have the whole house by myself until the next month.

Buffalo sucks in the summer. I mean, where is everybody? Is this what happens in a college town? That when in summer, everybody disappears? I hate it, I get bored by it. I cannot work. I mean, I really try hard to implement the mind-over-matter maxim and still get things done every day, but it is not like when there are people here. I guess I want competition. I want to be able to see that I am accomplishing something while others are not. I guess I cannot compare myself to other people and so I do not see myself moving, and I am not being properly motivated. Selfish, I know. But isn’t that instinctive? That one wants to be better than the next bloke?

I remember those dog races, where there is a rabbit going around the race circuit, and so the dogs would chase them. If there is nothing to chase, then nobody would move, right?

Anyway, it just reinforced my thought that I wouldn’t want to settle down in this city. I mean, Buffalo is a great city for studying. I guess the environment for pursuing an advanced degree is fabulous here. It is quiet, peaceful, and not a lot of distractions. However, that is that. I don’t see myself settling down here and finding work, buying a house in the suburbs, and enjoying the weather of Western New York.

Sometimes when I find myself in times like these, I daydream. What if I lived in Berlin, Germany instead? How would my routine be?

Anyway, enough of that depressing talk. I found this article over the web about a new fear: the fear of not flying. I guess it shows how people live nowadays.

So, here is another picture again from my Quito Centro Historico Series. This shows the Palacio Arzobispal from another angle. 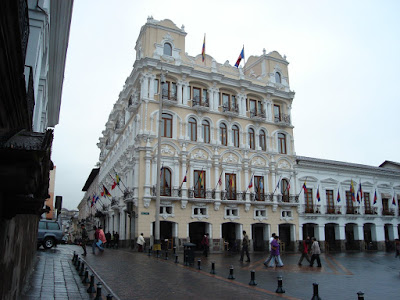