I am finally free of whatever bug I caught! Yay!

As I have blogged earlier, this all began one day before I flew back from Manila to Buffalo. Wow. One month earlier.

Anyway, I won't disclose again what happened, but Thursday last week, I finally went to the doctor. And the doctor gave me medicine that would last for ten days. And now, today, ten days later, everything is gone!

About four days before, my nasal passages were slowly clearing up. But then it felt that all the mucus moved to my ears, especially on my right ear. I was partially deaf. I hated it. But yesterday, it magically cleared up! I have my surround hearing back!

So, here we go again, a healthy and kicking LIW.

I had lunch today with some very close friends. They would be moving out of the area so I guess I don't know when I will be seeing them again. I have known them for about 12 years now. They've seen me grow up. And they're still cool. They gave me their address for now, and hopefully I'll bump into them in the future.

While at the bus this afternoon, I was annoyed by this seemingly all-knowing lady. She was very fluent in English, but her features suggested that she was a native of some other country. She had a companion, a Romanian. It seems that they go to graduate school together; their age didn't suggest that they were undergrads.

I was reading Kafka while on the bus but the conversation couldn't stop. Ms. K was so pestering Ms. R, and I couldn't help but think that Ms. K is so opinionated.

Finally, Ms. K was placated, and they in turn talked about Transylvania, about how Count Dracula is a legend, and again, Ms. K, in a show of "knowledge", tells Ms. R, who is the one from Romania, that people are building hotels and tourism is booming in Transylvania. Ms. R just nods her head.

Then, Ms. K tells Ms. R that she writes children's books, but never publishes it. Oh yeah? Yeah right. What if I tell you that I cook great pot roast but never switches the stove on?

Anyway, I was annoyed. I was annoyed by the fact that there is this lady, Ms. K, whose voice seems to fill the whole bus, and during the whole conversation, she dominates it. Ms. R only nods, agrees, answers "yes" or "no", but there is no substantial input from her. Only from Ms. K. She was tooting her horn so bad that time.

Ok, enough of the rant. Here is another photo from my Ecuadorian Flora Series. I don't actually know what they call this plant. Just gaze at it while you listen to Cristina Scabbia and the rest of the guys at Lacuna Coil do a cover of a Depeche Mode song. 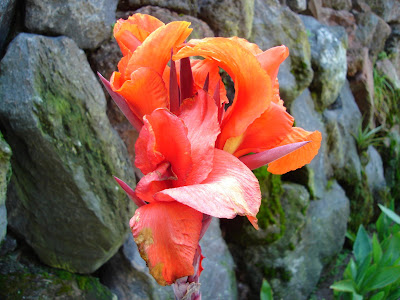