My summer class is two-thirds over. I already finished four weeks of lectures, and there only remains two more weeks; or four more meetings.

I am always thrilled when I see how the student's grades turn out. It's not that I am a sadist and is thrilled whenever I give a bad grade to a student. No. Nothing like that at all. What I mean is that students' behavior in class correlates to the grades that they will receive. And I am just amazed at how true that is every time.

I give progress reports every meeting for my students. I give them small white pieces of paper delineating how they stand in class so far. This is based on their performance; like their grades in their homeworks and attendance. Some students maintain a good number, some slowly go down every time I give them that sheet.

Anyway. Enough of that academic talk.

I borrowed a CD from the music library yesterday. I wanted some music here in the office, and so I went to the music library and borrowed a CD of Goyescas by Enrique Granados. Enrique Granados was a Spanish pianist and composer, who unfortunately died in a shipwreck in 1916, if I remember correctly. I used to play one of his pieces from his 12 Danzas Españolas. It was the Andaluza, which was a rather famous piece of his. It was originally written for the piano, but it sounds like a guitar. Indeed, when someone else transcribed it for the guitar, it sounds like a piece written for that instrument.

Anyway, so, Goyescas is a collection of piano pieces that was inspired by the paintings of Francisco Goya, hence, the name. They are pretty good, albeit long. I once had a score for these pieces, and they were really hard. Now they are the property of a good friend of mine in the Philippines, who is an aspiring pianist.

Did you notice the change in my blog? I got tired of the minimalist lay-out, that was mostly white with a few brown shades here and there and some pieces of wood. Besides, that scheme was almost 4 months old. So I changed it to this one, complete with flying birds in the mountains! By the way, that is a big hint for those who want to know where I am planning to go this coming May.

Finally, I want to extend a warm Happy Anniversary! to my folks in Prague. This day marks their 26th year of being married and in happy bliss. Guess what? Prince Charles and the late Princess Diana were married three days after my folks got married. But they are already kaputt! My folks are still going strong. Yay!

Ok, I have to go. But before I go, here is another photo from my Quito at Night Series. This is another of those small side streets that invoke romance, especially if you ride one of those horse-drawn carriages that are available for rent for a stroll in the old town. 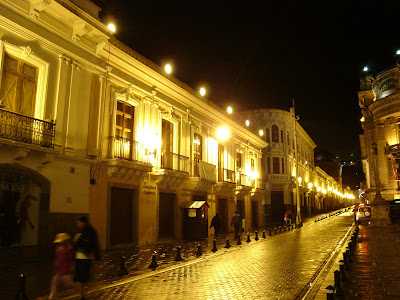