I didn't realize that I would also encounter the male summer smell that is so prevalent in European cities in the summer.

When I was in Vienna two years ago, I encountered this smell. The smell of a human male, who didn't go to the shower but instead mingled its way through other humans in public. The smell emanating from the dark and sweaty armpits. The smell that would suddenly radiate whenever they reach out for the metal bars in the trams thus exposing their underarms.

You know what I am talking about.

And the fact that there isn't any air-conditioned tram or subway in Vienna makes it worse.

Prague was the same. Last year, I always encounter the male smell everytime I am riding the tram.

And now, I encountered it here as well. In the shuttle that took me from South Campus to North, someone, I think it was the guy sitting behind me, who had this smell. It always crept beneath my nose. I turned my head to see who it was, but I couldn't figure it out. It made my head nauseous, I had to take my handkerchief out.

My first recollection of encountering this smell was in Japan. A certain guy that was close to the family was host to this smell. During the summer, it would slowly creep its way to our olfactory systems, and add to that the fact that Japanese typically take a bath before going to bed at night, not before leaving the house in the morning.

Yesterday, a student came to my office hours. After consulting with me, she asked what those two weird-looking figures who happen to be displayed in my office are. She was referring to the shrunken heads I got from Quito. Apparently she was scared of it. I then explained that they are fake, but they are replicas of the shrunken heads that the Shuar people from the Ecuadorian Amazon used to perform whenever they capture an enemy.

Hmmm, there is still a month and a half of summer. In the meantime, enjoy this photo from my Quito Centro Historico Series. This is the Ecuadorian flag flying high above the Presidential Palace. 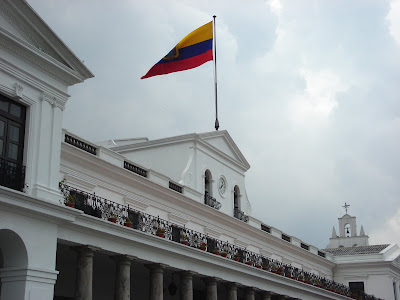