Recently, I have been sorting out my photos from one year ago, posting them in Facebook and backing them up in CDs. And I noticed a major change in my physique. I am gaining weight, and I have to avert it.

Last summer of 2006, I flew to Prague and spent 2 and a half months. I felt sexy flying there. I was rather lean, due to the fact that for a whole year before that, I didn't cook anything with meat in it at home. I only ate non-meat products. And even my parents noticed it, how flat my stomach was. I even went all the way to specifying my airline meal with Swiss International Air Lines as Ovo-Lacto Vegetarian.

But then, I was on vacation in Prague. Their cuisine was amazing. And, I'd rather try it, even though it has meat in it, and enjoy myself, than restrict myself and leave unsatisfied. So I did eat meat. But the vacation proved to be too long (2.5 months is indeed too long) so eating meat became part of my routine again. I even noticed the change while in Prague when I adjusted my belt a notch.

I came back to Buffalo, but the vegetarian routine didn't come back. I started cooking meat dishes. I also forgot to exercise. When I was living in Amherst, there was a neat little bike path near where I live, and although jogging on it or even brisk-walking on it wasn't regularly done, it was done. I then moved to Buffalo proper and the exercise was forgotten.

So, today, I woke up at 5:00 AM. Even before the sun was up. I got my running shoes and out I went. I started by just brisk-walking. I don't want to lose my breath by exerting myself immediately. I did a complete circuit of the UB South Campus. It was sort of cold, and the wind prevented me from soaking wet in sweat, but I still worked a sweat, as evidenced by my back.

I got back home after around 45 minutes. I guess I worked up my gastro-intestinal system by brisk-walking for that amount of time, thus, I headed directly to the bathroom and sat at the throne.

After that, I fixed myself a heavy breakfast. It is relatively heavy compared to what I usually have. I usually have a bowl of cereal with milk, but then that entails that I have a heavy dinner, which is usually the reverse of what is optimal. One should have a heavy breakfast, a medium lunch, and a light dinner. So, I fried myself one egg, and together with four loaves of whole-wheat bread, a tablespoonful of strawberry jam, some French brie, and a whole apple, I ate breakfast. I washed this down with a mug of green tea.

I have one serving left of my Thai Chicken Curry. I had it for lunch, topped over rice, and I will have it for the last time tomorrow. After that, I won't be cooking any meat products again for the time being.

I also bought some fruit yesterday when I was at the market. I am planning to stick to some fruit and tea for dinner. I bought a basket of oranges and some plums. Plus, there is the whole basket of apples that was bought by my roommate's aunt. My roommate isn't eating it so before it becomes overripe, I am eating it.

So hopefully, I can slice some pounds off my body after this. I did it before, I can do it again.

Ugh, the pains one has to undergo if one wants to look good. Oh well, enough of that. I also wanted to blog about my classes, since all three of them started on Tuesday for me, but I guess this entry is too long now, so I will save it for tomorrow. But, enjoy the first photo from my Oswaldo Guayasamin Series. He is a sculptor and painter who is a native of Ecuador. I visited his house-turned-museum-and-gallery when I was there. This first photo, albeit blurred, is the sculpture that will greet visitors to his compound. 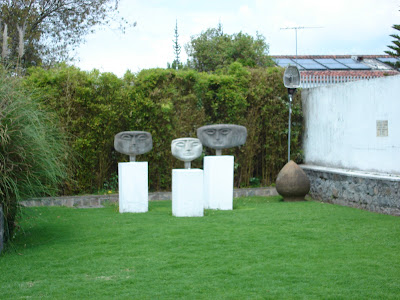