So I woke up today, and upon looking out the window, I have come to realize that today would be an interesting day, weather-wise.

And guess what? I am correct. The snowstorm that dumped snow and took the electricity out of Oklahoma decided to move up east and do the same thing to us. But the good thing is, it is not as bad as what happened there. I am just hoping that this weather would clear up before Monday, because Monday is when I do my disappearing act.

Speaking of people disappearing and appearing, my sister appeared here in North America yesterday night. I called her contact, and I actually spoke to my sister herself. She was fine, and apart from the bumpy ride from London to New York City, everything was okay. Her bags weren't lost or anything (although British Airways and London Heathrow Airport are notorious for losing luggage), and she made the land connection from John F. Kennedy Airport to Newark Airport, where her friend was picking her up. She has a job interview today, and hopefully, that turns out well. I am crossing my fingers for that.

Another person that is about to disappear is my Israeli friend. He just finished his classes and is finally undergoing the final preparations for his move to Israel. Too bad I never got to know him earlier, but he is a fun person to be with. We had lunch together for the last time (at least in 2007, who knows, I might disappear for a bit here in the United States and appear magically in Israel for a few days in the future, that is not out of my list, after all I don't need a visa for Israel (this sentence really is a run-on sentence, I myself am getting annoyed)) and it was great. I will definitely miss him, and told him that I will definitely be keeping in touch. I am also waiting for the postcards from Israel, since he knows that I collect some.

Anyway, one interesting thing I saw was when I was in the diner this afternoon. I went to the bathroom and saw the graffiti that they have there. One was complaining that Buffalo must be "God's anus" because of the amount of snow that we get. Obviously complaining about the weather. And when I look out the window, snow might be a pain in the ass but it is still beautiful, at least in my eyes. As long as it doesn't delay my flights, then I am fine with it.

I wonder why that person thought that divine waste was colored white. 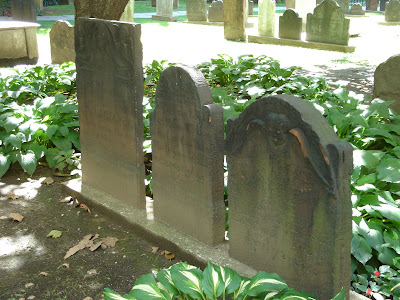 (Three tombstones in a row, from my Trinity Church Series)