So I threw away my former calendar, and replaced it with a new one.

I remember back in August, when I bought my new calendar for the new year in Barnes and Noble. I was starting to get sick of Salvador Dali, and so for this year, I bought a calendar featuring Japanese printed woodblocks. So every month had a picture either by Hiroshige, Katsushika, or some other Japanese artist who lived a couple of centuries back.

By then, I have been dying to take a break from Dali for the moment. I had enough seeing his melted clocks, carved women, fruit bowls turning into dogs, or a portrait of a woman from behind, turning into a portrait of Abraham Lincoln.

So yesterday, I was in my office in the afternoon, and I threw it away, dumping it in the wastebasket.

And speaking of Japanese woodblocks, somehow, it was related to something I will blog about later in this entry.

Anyway, 2008 started with a dreamy sequence for me. I woke up around 8:00, and although I tried and tried to go back to sleep, I couldn’t. Ha! I guess my body clock just doesn’t permit me to.

So, I was just there, being in and out of sleep, until I decided to lift my butt off the bed and have breakfast. I guess this was already around 10:00. But before that, I went online and checked my mail.

The usual stuff was there; my weather alert for four different cities around the globe, some comments in my blog who were mailed to my e-mail inbox, and one curious-looking mail, with a header in Japanese.

Somehow, I recognized the e-mail address, and when I opened it, I definitely was right in thinking who it was. It was from a classmate of mine back in senior high school. This was the high school I went to located in the next town. I had to take the train everyday and get off at the next station, then walk all the way to the seashore, because the school was very near the Marina. I remember if I didn’t opt to bring lunch, I would stop at one of the convenience stores on the way and buy lunch.

Anyway, so I read his e-mail, and he gave me a link to his personal site, you know, one of those social networking sites that are popular to people nowadays. So I checked it out, and whoa!

I didn’t recognize him.

It took me a few seconds to sort of change, manipulate, alter, whatever verb of change you can think of, my memory of him, in order to match the current photo that he had in his site.

It was like transforming a fish into a camel.

I guess that just shows that it’s really been a while since I had contact with him. After all, it was eight years since I last stepped in the land of the rising sun. I left Osaka in April 2000, and now it is January 2008. A lot of things must have changed by now.

Anyway, so I e-mailed him back, exchanged pleasantries. We’ll see what happens.

Speaking of Japan, I am excited to see the next episode of The Amazing Race. This is because they will be flying to Osaka, Japan, and the preview seemed like they were heading to Himeji Castle. I remember visiting that castle once. I think it was when I was 14 or 15. I remember still wearing that blue winter jacket, which, I know, somewhere along the line, I threw it away, since it became too small for me, while I was still in Japan. I visited it with a family friend and my sister, and we ate in a steak house for lunch, which, although it was sort of dark inside, the steak was pretty good.

Anyway, I guess doing nothing for a day makes one go into these dreams, sleeping or otherwise. It seemed like my past has somehow caught up with me, in a weirdly surreal way, bringing back memories, old friends, old places, old homes.

It’s like being in a parallel world, where things are anachronistic, and the hands of the watch spins the other way around. 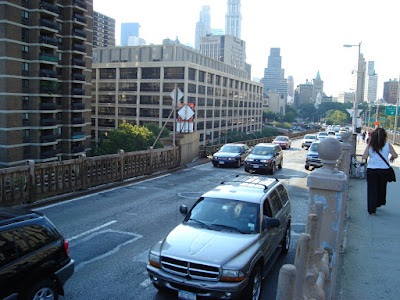 (Starting to cross, from my Brooklyn Bridge Series)