I guess it is the prototypical spring day here. Not so cold, not so warm weather, and a steady dose of rain, which hasn't stopped since morning.

I don't know what it is, but I always imagine Europe, say Paris, or Geneva (it has to be a Francophone city), whenever I am in this weather.

I don't know, but images of trams, daintily-dressed women in their leather coats and tight-fitting gloves, boarding and getting off the trams. Or possibly sitting on the passenger seat of a Citroën DS, complete with a scarf tied over her head. Images of the city's lights, blurred due to the speeding car, or the images of the people walking on the street, blurred by the passing tram, as I sit inside, traversing the city.

And listening to the band Mogwai doesn't alleviate the image either, as this post-rock band plays music with no lyrics, just instrumental music.

Cobblestones, umbrellas, men and women in long coats, holding a croissant or a coffee cup, crossing the streets, watching the windows, admiring the shop's windows, wondering whether the hat on the mannequin looks good at themselves. Men on the phone, hiding from the public view by wearing large sunglasses even if there's no sun out, instead, a light pouring rain.

My first day in Europe was a rainy day. I visited Vienna in May of 2005. Stepping out of the airplane on the tarmac of Schwechat airport, I was greeted by a misty, foggy morning, with my winter jacket on, hurrying from the aircraft stairs to the temporary comfort that a bus provides, until it took us to the terminal building.

A few hours later, I found myself getting off Tram 40, in Vienna's Währing Bezirk (18th district), pulling my suitcase on the incline of the road.

The rain brings back memories, images stored in our brains. No matter how distant they may be, they'll still be back, one way or the other. One just needs a little connection, a trigger, and everything will be back in a flash.

In this case, it was the rain. 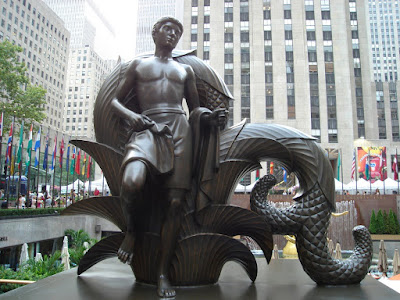 (Statue at the Rockefeller, from my New York City Series)