I suppose if I were to pick a place where I would want to live and settle down, perhaps I would pick a city in Europe. The aura is just different. Weighing all of the things that one considers when deciding these things, I suppose European cities win over other cities around the world.

I first set foot in the European continent in spring of 2005. It was basically my graduation present, traveling in Austria, Greece, and Italy, visiting sites of those three countries. I have to say I loved every bit of it. The cheese, the gelato, the trams, the old buildings. The few things that I didn’t love were few and far between, such as the dog turds you find in Vienna, and the sometimes very presumptuous citizens of these cities. However, the other stuff easily trump those complaints.

My second visit to Europe was during the spring and summer of 2006. I spent two and a half months in Prague, after living for a year in Buffalo. I basically toured the whole city, and I visited other places around the Czech capital as well, such as Terezin, Beroun, Kutna Hora, and other places. I also had fun here. I liked the Czech beer, and I liked the easy-going attitude of the Czechs. I couldn’t really think of any not so desirable memory in this one.

So here I am, about to embark in my third visit to the continent, again, flying from the Atlantic. My bags are packed and ready to go, I am standing here, outside your door. Oops, I suppose that isn’t my line. That was from some song back in the days, back even before I was born. Scratch that. But yes, my bags are packed, and I am just waiting for my friend to pick me up and give me a ride to the airport. I have a flight to Chicago, and after that, to London, and after that, to Copenhagen. I will be in Denmark for two weeks, and after that, I will proceed to Hungary.

I have to admit, I am excited. This will be my first visit to Scandinavia, and this will also be my first visit to Hungary as well. I must say I am excited to be surrounded by people speaking Hungarian. Although I have this impression that Danish is much harder, even though it is a relative of German (which I somewhat know) and English (which I speak fluently). The reason is because Danish words are not pronounced as they are spelled, unlike Hungarian. Admittedly, there are digraphs and even trigraphs in Hungarian, but those are pronounced in just one way, and exceptions are few and far between, as far as I know. However, Danish, of my, I hear sounds that are not spelled, and I see letters that are not pronounced. The good thing is that the Danish population have a rather good command of English. But, I’ll try and see how I fare.

So there, I will let you go for a while now, as I have a flight to catch. 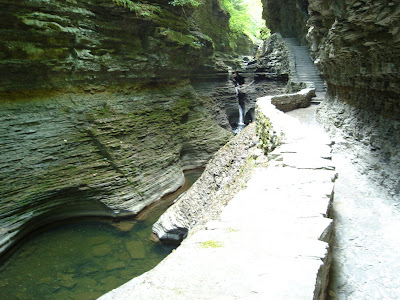 (Lost in the Glen, from my Watkins Glen Series)