Whenever my friends and I go to the Thai restaurant that is near campus, I usually order the Pad Thai. I suppose I am addicted to this, and it just is a mix-match of various different condiments, and the flavor is rich and binding to all the ingredients. I tried doing this dish once at home, but I failed.

Anyway, I suppose this blog post will be like that, a Pad Thai of sorts, with various different topics.

The first topic would be a recollection of my day yesterday. Yesterday was a very hectic day for me. I had something scheduled from 9:00 AM to 7:00 PM straight. It was a ten-hour non-stop day. If that were a flight, it would have been a flight from Vancouver to London.

I had a class at 9:00 AM, which lasted for three hours. We discussed language acquisition, and the innateness problem. After that, I had a meeting with a professor from a department that is not my own, but from the Psychology department. I do work in her lab, and there is a large chance, actually, 99% chance that she would be part of my dissertation committee. I met with her because I had to have her review my IRB protocol before I can actually submit it to the reviewers, since the experiments will be conducted in her lab.

After that, we are already at 1:00 PM. Good thing my previous meeting ended a little early, I had about 12 minutes to eat lunch. Then, I had a meeting with a professor in my department, since I am his research assistant, and we were brain-storming ideas for a problem that we have, and so we were bouncing ideas off each other on how to investigate the problem and test it. That meeting lasted about 45 minutes.

Then, I went to the other building, where the Psychology lab is located. I work there for three hours every Tuesday, and so I was running participants with the experiments that they have signed up in. That was very busy. While they were in the testing booths, I was also digitizing the results of the previous participants, typing their data into the computer.

After the three hours, I went back to my office, and waited for two participants for the experiment that I have designed for my research assistantship. I had a 5:00 PM, which did not show up, and a 6:00 PM, which showed up.

I realized that my schedule needs me to be able to switch gears really quickly, since I have multiple different projects occupying my brain in a single day. I am juggling multiple different experimental paradigms, and running other experiments at the same time. In a way, it gets my adrenaline pumping, and I am enjoying the high.

I have to revise the IRB protocol for an experiment that I am planning to run this summer. There are a few legal and technical misgivings that I have to correct.

This is the last blog entry which feature the Embassy Row Series. There will be a new series for the next post, so watch out for that. The series will still feature pictures from my trip to Washington DC, back in December 2007. I am so back-logged with respect to that. 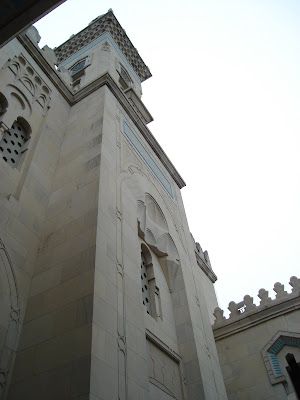 (Tower of the Islamic Center, from my Embassy Row Series)