So what is recursion? Recursion, as defined by the Oxford English Dictionary, is the property of a certain rule in which the output of the rule can serve as input to the same rule. I suppose this is best illustrated by a formula. So, let's build a sentence. These are the following rules for building a sentence.

Using the above rules, we can build the following sentences.

However, there are plenty of other sentences that are possible, at least in English. Let us add another rule or two.

Using these rules, we can now build the following sentences.

Now, notice the application of the rules in a recursive fashion. The rule that generates a complement phrase gives a sentence as an output, which then allows one to generate a new sentence again, and again, and again. Here are other examples of recursion. For ease of exposition, I added brackets as necessary.

8. I saw [the dog that chased [the cat that killed [the mouse that ate the cheese]]].

I could go on and on and on with this, describing each noun with a modifier. However, not all recursions can be infinite. There are times in which having multiple embedded stuff can make processing difficult, and one such example is center-embedding, where the recursive material is inside the sentence, not at the edge. I will illustrate this one by one, for ease of interpretation.

Who here still understands what the last sentence means?

Anyway, some linguists, notably Noam Chomsky, argues that recursion is one of the most fundamental aspects of language, and by having recursion possible, one can generate an infinite number of sentences using just simple finite rules. Other linguists, however, such as Daniel Everett, challenges this view, using data from other languages such as Piraha, in which there apparently is no use of recursion. If this is the case, then recursion cannot be universal. Obviously, the debate is more complicated than how I outlined it here, and it is keeping linguists busy. In fact, linguists who find this aspect of language fascinating are having a conference right this moment, in UMass Amherst. We'll see how this plays out. 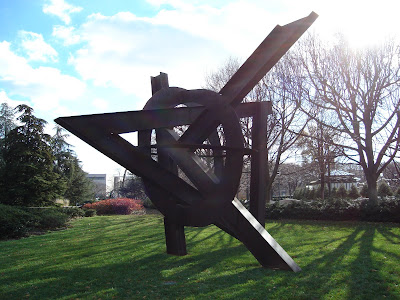 (Weird Contraption, from my National Gallery of Art Series)