In reference to a post I did a couple of months ago, I have the same entry title for this one. I suppose there are just a bunch of things that I felt like talking about today, and there isn't really a common denominator except that it happened around my being.

Well, first off, I am happy to announce that the roommate search is over. I found a new roommate, and this new person is from India. From the looks of it, he looks cool, and best of all, not messy. He seems to be quiet, and is also a graduate student. The best thing I suppose is that he is a doctor: he has an MD, so am I supposed to feel safe now? Not that I felt unsafe before. But I just find it a little funny that I will be sharing an apartment with a doctor.

The other day, my friend and I watched the sequel to L'auberge espagnole, entitled Les Poupées russes. Again, I liked the non-linear narrative of this one. Anyway, we were making fun of Romain Duris, whenever he would speak in English, because his English with a French accent is hilarious. No offense to my French readers, but it really cracks me up.

Speaking of being funny because one speaks in a weird accent, I once cracked a joke on my adviser (who is French) during a party. I wasn't even talking to him, but to someone else, when I used the word genre with a very bizarre pronunciation of the uvular /r/. I suppose I gargled. My adviser was within earshot, and when he heard it, his face just contorted and it was so funny, it was the best face of the night.

Change of topic: I just finished my bottle of Givenchy Pi this morning. Wow. It took me 11 years to finish the bottle. I remember getting this bottle in the duty-free section of Osaka's Kansai International Airport, back in 1998. I wasn't even flying, instead, it was my mom who was flying back to Manila. And we happened to be late in heading to the airport: we thought that the flight was on a different schedule, but it changed for the season, and so the flight was leaving an hour earlier than we thought. We practically ran across the airport, and since I had the diplomatic pass (which allows friends and relatives of diplomats to go through security and say goodbye to their travelers right at the gate), I was able to go to the duty-free section and so when my mom finally cleared security and immigration, we went to the duty-free section, I told her what I wanted, and she got what she wanted, bought it, and then she flew back to Manila. I on the other hand took care of the purchases and took them back home to our apartment in Osaka. I didn't realize that that bottle would see its end in Buffalo.

So yeah, that's that. Oh good, as I write this, the sun is coming out. It's been cloudy all week, sometimes rainy even. I suppose I liked that weather, but it was a little bit chilly for June, and so I actually wore my sweater yesterday. But as long as the temperature doesn't make me sweat, then I am fine with that.

Ok, this is the end of this entry, I am off to get a haircut. 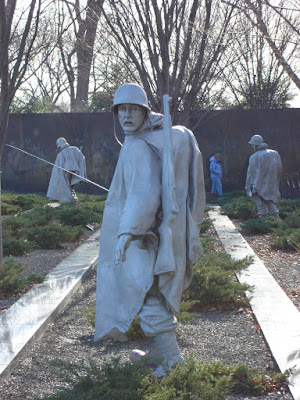 (Steel Soldier with Real Person, from my DC Memorials Series)