Four years ago, I once thought that I would be a syntactician. But hey, things happened, and then semantics just crept up on me, and now, I do psycholinguistics. I still like syntax, but I find other things that are more interesting than it.

Anyway, let's talk about syntax. Syntax is the subfield in linguistics that deals with how words are combined to make phrases and sentences. Various topics are covered here, and so let us try to tackle the basics with this post.

Languages usually have one privileged syntactic argument per sentence. In plain terms, there should always be a subject. So, in the English sentence John likes Mary and Bob, the subject of that sentence is John.

How do we know this? Because there are certain tests that we can do, one involving agreement. The form of the verb is dependent on a certain entity, and it is the subject, at least in English. If the sentence were John and Mary like Bob then the verb is different because the subject is not singular any more.

There are languages that allow sentences to have no subjects. English is not one of them, so in the sentence It is raining, the subject it is a dummy subject. It does not do anything semantically, it simply is inserted there to fulfill the English requirement that there should be a subject in every sentence. But other languages allow absence of a subject, such as Spanish and Italian, and various Austronesian languages.

There is a high occurrence of the subject being the entity that does the action, but it is not always the case. Consider Mary was slapped by John. The subject is Mary but she is not the entity that did the action. So syntactic arguments such as subject and object are not the same as semantic roles of agent and patient (but that is for another post).

There is also the third argument, which goes by various names. Some call it the indirect object, dative, recipient, what have you. So, in the sentence John sent Mary some chocolate, Mary is the third argument. This is used whenever there is a verb that takes three arguments.

The nice thing about these arguments is that you can invert them and make new sentences out of it. Such as Mary was sent some chocolate by John or Some chocolate was sent Mary by John (is that grammatical?)

Let's talk about syntactic operations in a future post, shall we? 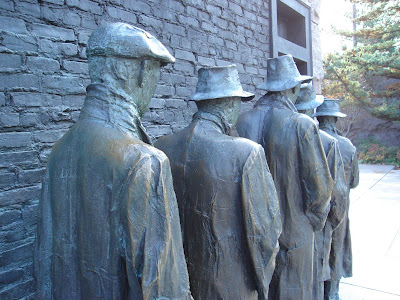 (Behind the Metal Queue, from my DC Memorials Series)