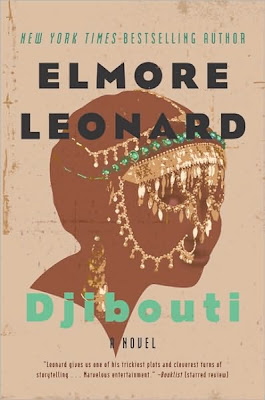 Perhaps this is a novel that for me, it started out as good, great in fact, but somehow the energy tapered in the middle and ended on a sour note. It was bizarre: for the first half of the novel, I was excited because it seemed like a good book, a change after being disappointed in the previous book that I was reading. However, after I crossed the half-point, I became dismayed that it didn't turn out to be a good book in the end.

Let me tell you why, but first, the requisite synopsis. Well, this book introduces Dara Barr, an American documentary filmmaker who has made several award-winning documentaries in the past. This time, she decides to make a documentary about the piracy that happens off the coast of Somalia. The novel begins as she steps off the Air France plane from Paris in Djibouti International Airport. There she meets the other main character, Xavier, a 72-year-old seafarer who becomes her assistant, who also happens to be 6 foot 6 inches tall. Together, they hire a boat and get acquainted with several Somali pirates. One of them have a name and is featured quite well: Idris.

The first half of the novel talks about the lives of the pirates and Dara's efforts in filming them. That in itself captivated my interest: there was enough conflict and action going on there. However, the action goes up a notch, when Idris and his cohorts hijack a ship that carries liquefied natural gas, which is basically a floating explosive. The pirates capture two of the crew, Qasim and Jama, and they learn that they are in fact al-Qaeda, and that there is a reward for their heads. They decide to take these two men to the US Embassy in Djibouti and collect their reward.

This is where the second half of the novel begins. Jama happens to be a hot-blooded American who turned radical Muslim while in prison, and he goes to a killing spree, killing people who know his American name, James Russell. This makes the most of the action in the second half. I usually don't give away spoilers, but in this type of novel, one knows that the hero will eventually triumph, and in the end, Jama dies.

So, why did I not like it? Well, let's begin with the narrative style. The point of view shifts all the time. First, it was written from Xavier's point of view, then it shifts to Dara's, then it shifts to the terrorists. I wished Leonard made up his mind and used just one perspective on things. It was bizarre reading "the woman" when the last chapter was already talking about Dara and her existence was fully established; it just made sense once one realizes that the chapter in question was written from the perspective of the terrorists.

Also, I thought this book was about pirates. The Library of Congress information said that this book was about pirates, piracy, and the Gulf of Aden. That was true for the first half of the book, but the second half didn't even mention anything about the pirates at all. The first half featured Idris and his cohorts, and the novel narrated Dara's interest in them, but the second half shows Dara getting more interested in the terrorist Jama, as if she felt like she's some Lara Croft who is invincible and able to take any challenge, including a cold-blooded terrorist. This novel felt like two books in one: the first one is about Dara and the pirates, and the second would be its sequel, Dara and the terrorist.

And what is it with the obsession with age differences in sex? Fine, Dara is 36, and Xavier, her bodyguard, is 72. I don't see why it was in the novel at all. It felt like it was a factor in the novel just because sex sells. People would be more interested in reading it if there's something sexual in it. But seriously, if one takes out all the references to sex in the novel, the novel would still stand. There's enough action in the novel that the novel doesn't need the reader to speculate whether a hot 30-something babe is going to bed with a 72-year-old man who needs horny goat weed in order for his dick to get hard.

So yeah, this novel started out well, but ended bad. I was disappointed, and it was not what I was expecting. It felt like an airport novel, heck, I finished reading it in two days. 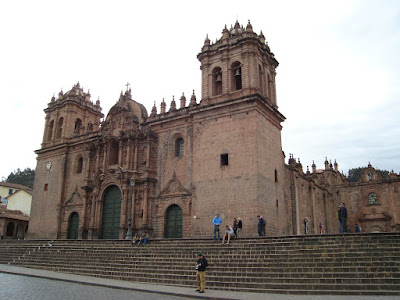 (Cathedral Steps, from my Cusco Series)