So Christmas has come and gone. And finally, I was able to watch the latest Glee episode, which happened to be the Christmas episode. And after watching that, I realized that wow, Christmas has evolved so much that it feels just like any secular holiday now.

I haven't celebrated the Christmas holiday since time immemorial. And I have no plans to start. But sometimes, I see other people who celebrate it and wonder whether they really celebrate what they claim to be celebrating or not.

So, traditionally, Christmas is a holiday about the birth of Jesus. Assuming that he really was born in December 25 (although there seem to be evidence pointing to the contrary: December would be a time of the year where it would be too cold for the shepherds to be staying outside, among other things), Christmas would be the day where people celebrate the birth of their God (apparently, there are people who order cakes in bakeries with decorations saying "Happy Birthday Jesus"). Christmas would feature scenes from the nativity, and everything else related to the supposedly holy event. But is that really what Christmas is about for people?

After watching the Glee episode, and after reflecting on how the people here in Buffalo interact with Christmas, it seems to be that they are celebrating something different. First, the tree. Where is it relevant in Jesus' birth that there should be a tree? Presents? Gift-giving? It seems that that is the focus of people nowadays, that they look forward to Christmas not because they want to celebrate Jesus' birth, but because it is a tradition of gift-giving and receiving. I suppose, people are more looking forward to what kind of gifts they get, but I don't think they are looking forward to the act of shopping for the gifts that they need to give. Yes, sometimes, it seems that giving gifts become more obligatory, since it is after all, tradition. Why is it the case that people just give gifts whenever they feel like it? Why do they need a date such as December 25 to give gifts?

I realized after watching the Glee episode that as much as Christmas was featured in it, never in the script was the name Jesus mentioned. I guess, if one asks a toddler what Christmas is about, this toddler would answer that it is a holiday about Santa. Yep, instead of Jesus, Santa was the one character that was frequently mentioned. Yes, boys and girls, the reality of the matter is that Christmas is about Santa, not about Jesus.

Funny, but I was in the supermarket the day after Christmas. And guess what? All the Christmas candy was gone, and instead in their place was Valentine's Day candies. That's two months away. As if Christmas has never happened. Poof, and immediately, Christmas is gone. It's Cupid's turn now, boys and girls, Santa should be heading back to the North Pole, and won't be back until next year.

So, perhaps people would wonder what this post was about. Was it a rant about Christmas? What am I trying to accomplish here? Well, contrary to popular belief, I am not advocating people to go back to the traditional way of celebrating Christmas. I could care less about whether people celebrate Christmas for Jesus or for Santa. I just like to give a wake-up call, and see to it that people actually know what they're doing. If they realize that they are celebrating Santa's trip from the North Pole instead of Jesus' alleged birth, and then decide that they should celebrate Jesus' alleged birth instead, fine with me. I just want people to think, ponder, and investigate what it is exactly they are celebrating. People should be critical and examine what they are partaking in. People should do things not because it has been the tradition in their family since time immemorial (and therefore it is the right thing to do), but because after extensive thought, they think that it is indeed the right thing to do.

People should think, not simply believe. The same thing goes for Christmas, whether you choose to celebrate it or not. 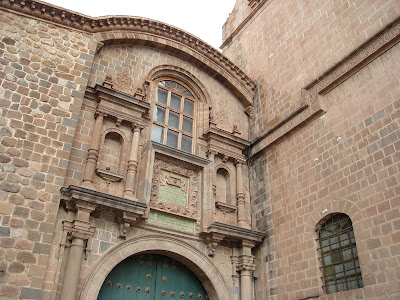 (Cathedral Windows, from my Cusco Series)