The other day, I needed to make dinner, and somehow, I needed to schedule it because I would be out of town for a few days. I didn't want to make something, only to eat one portion of it and then leave it in the refrigerator for 2 weeks, in the end wasting it. So whenever I go out of town, I plan my cooking, so that my refrigerator ends up empty.

So I decided to experiment yet again.

I had 6 chicken thighs in the freezer, so I figured I cook them. I took them out the night before, and I also went to the supermarket to get some other items. I bought a stalk of celery and a small onion. That's about it.

Then, I boiled the chicken for about 30 minutes, removing the brown material that comes out of meat. After thirty minutes, I figured that they were already cooked. I took them out of the water, since it was thighs, they were quite oily, so I rinsed them so that the fat would be discarded. Then, I minced them, and chopped them into small pieces. I also did that with the onion and celery. Then, I put in some mayonnaise, perhaps about a third of a small bottle. That was all the mayonnaise I had in the house, and it was good that it seemed enough. Otherwise, I would have to don my winter coat and run to the corner convenience store to get another bottle. Thankfully I didn't need to do that.

Then, I put in generous amounts of salt and pepper. Finally, there was a little bit of taste. But then I wanted to be cavalier about it, so I rummaged through my spice rack, and basically put in perhaps about a teaspoon of curry powder. It changed the taste, but not enough. Unfortunately, a teaspoon was all I had. So I rummaged again, and put in several shakes of oregano, and several shakes of cumin and coriander, enough to change the overall color of the whole mixture. Then I stirred and stirred, and voila! Experimental Spiced Chicken Salad!

It goes well with bread.

I guess I didn't follow a recipe for this, but I was modeling it after the chicken pasta salad that my mom used to make. We would boil several pieces of chicken breast, and it will be mixed with macaroni, raisins, and pineapple chunks. Somehow, the mixture worked. It also produced tubs and tubs of salad. But since it was only me who's going to be eating this thing, a salad on a smaller scale is enough.

I also realized that making the salad with chicken thighs instead of chicken breasts made a difference. I prefer thighs better, I have this impression that it is less drier that way. Perhaps because of that, I was able to get away with using less mayonnaise than usual.

The chicken salad that mom makes has this interesting property that it tastes better as it ages. Hopefully this is the same. Because as much as I have planned things, it seems that there will be a little bit of a leftover before I leave for Pittsburgh, so we'll see whether it still tastes good (or better even) when I get back. 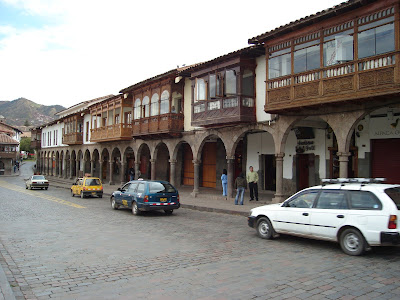 (Rows of Ancient Houses, from my Cusco Series)