The other day, we were watching a rather intriguing movie entitled La Moustache. It was a rather interesting psychological thriller, about a man who shaves his mustache off, and then suddenly realizes that his wife and everybody else believes that he hasn't had a mustache at all. Thus, it was quite creepy.

Anyway, at one point in the movie, the main character just goes to the airport and buys a plane ticket to go to Hong Kong. Without any plans, without any preparations whatsoever, he just showed up at the airport and looked at the timetable, and bought a ticket for the next departing flight.

I immediately thought, wow, that was awesome!

Then I realized that not everyone has that privilege. When we are born, we immediately get categorized into various artificially-constructed groups. When we're born, where we are born determines whether we can have these privileges or not. If you're a Danish citizen, can you just show up in the United States without a visa or not? Can you just on a whim, buy a ticket to Hong Kong and fly immediately that day?

The funny thing is that there are plenty of things that are about us and yet it was decided for us and without our consent, so to speak. Just in the realm of travel, as a Filipino citizen, I am free to travel without a visa to several countries, like Hong Kong, Thailand, India, Peru, Colombia, and Morocco, to name a few examples. Citizens of other countries may have more or less restrictions than me. And if I have a valid US visa for example, other countries become accessible, such as Mexico and Guatemala. All of these are issues that can pertain to me, and yet I had no say in deciding it.

So, in the long run, it is quite interesting to ponder about the idea that everyone is brought to this world is equal. A lot of people want to believe in that, but in actuality, that's a fallacy. There are inequalities the moment a person is born. I just illustrated an example from the realm of travel. As much as I want to be an idealist, the state of affairs is that that is not the case. 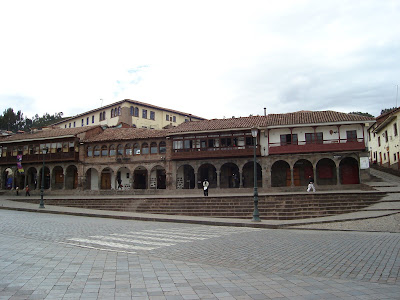 (Cusco Shops and Stairs, from my Cusco Series)