Hello People from the Falls!

What do you do if you have a multiple-entry Canadian visa, and you know that there's a concert right across the border?

Yeah, that was a rhetorical question.

Anyway, last night, we decided to head to Niagara Falls, Ontario where a New Year's Eve concert was being held in Queen Victoria Park, right in front of the world-famous Niagara Falls. The weather was unusually warm (7 degrees Celsius!) and so there were lots of people. The news estimate was that it was about 50,000 people all in all who showed up. 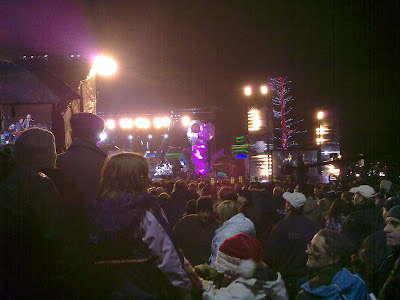 This is a crappy photo I took with my camera-equipped phone: I never intended to take photos, but the timing seemed right. I had fun listening to Barenaked Ladies and Great Big Sea. 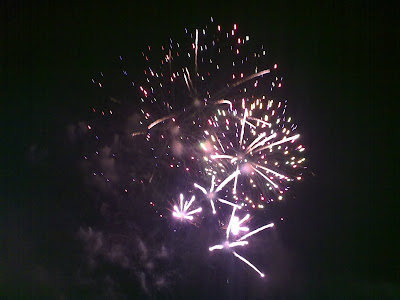 We also watched the fireworks, and again, I took a crappy shot. But more than that, I guess it was fun, I wasn't too familiar with the Barenaked Ladies before, and I didn't realize that they're fun and comedic with their songs. They were very funny: somehow they were able to incorporate Empire State of Mind, Lose Yourself, and other songs into their own, and it was just funny. It was a rather wholesome affair: they did two countdowns, one at 9:00 PM and another at 12:00 midnight. They said that the 9:00 PM was a rehearsal countdown, but also because there were kids in the audience who had early bedtimes, so it would be nice for them to see a fireworks display without waiting for the midnight to come in. I later looked that that was New Year's countdown in Brazilian Standard Time.

We left at around 10:30 PM, because we didn't want to mingle with drunk people: the later the time is, the more the probability of encountering drunk people. So yeah, after seeing the first fireworks display, we walked back to the border, crossed the bridge on foot, and showed our passports to the American officers on the other side. (Cathedral from the Side, from my Cusco Series)