The other day, I tried experimental cooking yet again. I found this recipe for Chicken and Sausage Couscous, from Epicurious, which in my opinion, is a rather good repository of recipes. The thing is, their recipes aren't just collections of submitted recipes by readers from around the world, but instead, they are recipes that were actually featured in food magazines in the past.

So, I wanted to make couscous. That was the first constraint. The second constraint was that I wanted the couscous to be the main dish. So it had to be something more filling, which is why I found this recipe. However, as with my cooking, I just mix and match things in an impromptu fashion, so I looked at this recipe to get an idea, but I didn't even follow it. I thought that it had too much meat in it, not only did it have chicken but it also has kielbasa in it. So I figured I should increase the vegetables and decrease the meat. And since I wanted it to be a quick cooking experience, I removed the chicken.

So, when I was in the grocery store, I bought a pound of kielbasa (the original recipe was only for 2 servings), an onion, a bag of carrots, a package of fresh Brussels sprouts, and a small can of tomato paste. At home I already have couscous, butter, turmeric, vegetable broth cubes, and cayenne pepper.

So I envisioned this one as follows: I have to cook the vegetables first and soften them, and then add the kielbasa, and once everything else is cooked, I should add the couscous and turn off the heat, letting the couscous cook in the juices. Now, as with cooking couscous, there's a ratio of 1 cup of liquid to 1 cup of couscous. The fact that I am cooking couscous with liquid that is not especially for cooking couscous only makes it a little tricky. I don't want my couscous to turn either dry or soggy.

So first, I chopped every piece of vegetable I had wanted to put. For the Brussels sprouts, I just chopped off the bottom stump. I then melted a half-stick of butter and sauteed the onions in it. Once the onions were golden and soft, I put the Brussels sprouts and carrots, together with 2 vegetable broth cubes and 2 cups of water. I then chopped the kielbasa and added it, once the carrots and Brussels sprouts were a little soft. I also added another cup of water, together with half a can of tomato paste, 3 teaspoons of turmeric, 1 teaspoon of cayenne pepper, and a random amount of salt and pepper. Once it simmered, I added in 2 and a half cups of couscous and turned off the heat. After five minutes, I fluffed them. It looked fine then, but after a day in the refrigerator (I cook one pot and that usually lasts me about 3-4 days), it felt dry, so I added a small amount of olive oil and that did the trick.

So yes, that was another successful day at experimenting in the kitchen. I actually had a friend who tried it, and apparently liked it (she cooked something for me and I had to return the container, so I returned the container filled with couscous). The thing is, I think I can recreate it, but it won't be an exact replica, since I just followed my mood and not some written instructions. 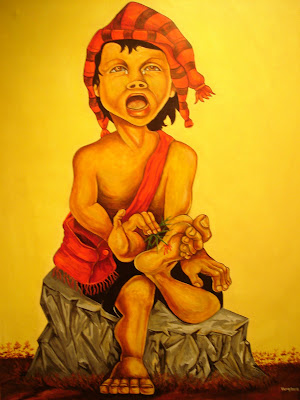 (Boy's Bloody Foot, from my Modern Art in Cuzco Series)