The Snowstorm that Wasn't

Two weeks ago, we had a "snowstorm". Yep, there's quotation marks on them. The thing is, it was a rather weird experience, and surreal too. There are things you expect, and then there are things that actually happen. And with this snowstorm, it was more of an oxymoron.

So, what exactly happened?

Well, the day before, we already knew that somehow, the university will be closed. Now the closing of the university is a big thing, since in my 5 and a half years of living here in Buffalo, there were only two other times in which the university closed. This was a bizarre weather phenomenon we experienced: it started snowing in the afternoon of October 12, 2006. That was surprising, since it felt like it was too early to be snowing. I even blogged about it. That turned out to be disastrous: I lost power and had to camp in other people's homes and in my office, and finally, four days later, we got power again.

That was the first time the university closed in my recollection.

The second time was February last year. There was a phantom shooter: everyone thought that there was a person with a rifle who entered the main library, and so the building was on lockdown. Classes were canceled that afternoon, and we were all told to go home.

That was the second time the university closed.

So yes, it was memorable that the university closed pre-emptively, nonetheless, for this snowstorm. So Tuesday night, we were all warped up, that the next day would see us all snowed in. We even went to the grocery store and bought food, so that we would be prepared in case something happens.

But no, the day after, that morning, it was balmy. It was rather mild, actually. Yes, there was a bit of snowfall in the afternoon, but that felt normal I guess. It was weird. I almost got frustrated since I was supposed to have a meeting with my adviser that day, and yet because the school closed, I have to wait another week to meet him.

Oh well, things happen. I just caught up on my sleep, and did a little bit of work at home, but in short, it was a slow day. 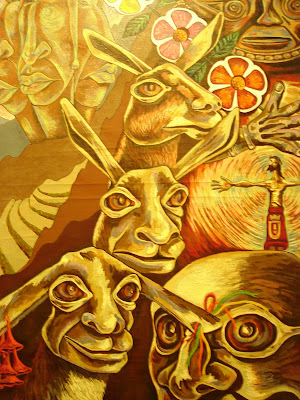 (Cuzco's Donnie Darko, from my Modern Art in Cuzco Series)