On Revolutions, Dominoes, and Hypocrisy

I have been following these news events closely, with news feeds from the BBC, the New York Times, and Al-Jazeera coming into my inbox every day. The primary reason for that is the simple amazement at how coordinated action by the people can lead to change. Especially if the change is very much needed.

Last January, I made posted something here about godlessness and democracy. I made the conjecture that a situation where there is a position of infallibility is unsustainable, and that it is bound to end sooner or later. Whether this position is filled by a god by virtue of religion, or whether this position is filled by a government official by virtue of an autocratic government, the end result is the same. People will rise up and fight eventually.

It is interesting to see how things are progressing. When the Egyptian revolution was in progress, Iran actually supported it, saying that the revolution is some sort of Islamic awakening. And yet now, when there are protests that are happening in Iran, the government decides to eliminate it. Basically, protests can happen in other countries, and other countries can have an Islamic awakening, but not in my backyard. How hypocritical is that?

Anyway, in the aftermath of the Tunisian and Egyptian revolutions, protests are currently being held as well in Bahrain, Libya, and Yemen. What will this bring us? At the very least, it shows that the current regimes are not functional, and there are plenty of people who want change. The police and military can only kill so many protesters before the balloon bursts, and a fuse breaks. Whatever happens, this is an interesting scenario to watch as to whether collective civil action will triumph or not.

Because of the domino effect, I have actually looked into why there is this infectious wave of protests that can happen one after another. Apparently, there is such a phenomenon as the revolutionary wave, first observed in the late eighteenth century. In 1776, there was the American Revolution, followed by the French Revolution in 1789 and the Haitian Revolution in 1791. In the beginning of the nineteenth century, there was the Latin American Wars of Independence, which resulted in the creation of new countries in Latin America that were previously under European colonial rule. In the end of the twentieth century, there was the wave of revolutions that eventually resulted in the fall of communism. In more recent times, there's the Color Revolutions that swept countries in Eastern Europe and Central Asia.

What seems to be the common factor here? As I have said before, it's a position of infallibility. Protests aren't usually the first thing that people would do, if they want to change something. It is not the case that when there is something that they want to change in the current system, they immediately resort to protesting in the streets. Instead, they try other means first. But if these other more peaceful means are unsuccessful, then protests are usually the last resort.

When I was in undergrad, I went to a university where protests were common. Students from my university were known to be activists and highly political. When the Philippines had its own version of a dictator in the form of Ferdinand Marcos, students did a lot of protests, which eventually resulted in the proclamation of martial law in 1972. Even when I was a student, I remember seeing plenty of walk-outs and rallies that protested various things, such as the US Invasion of Afghanistan and Iraq, budget cuts, and so forth. I remember being in class in March 2003, and some activist asked our professor to give her a few minutes of class time, and when that was granted, she entered our room and told us that in a few hours, the United States would be invading Iraq.

At that time, I could care less.

But now, I realized that voicing one's opinion is a fundamental human right. We all have the right to think. If you ignore this right, it will go away, and an infallible entity will take over and think for you. As much as I do not like the fact that there are deaths that have resulted in these protests in the Arab world, to some degree, I feel that this is the only way in which things will change. ordinary citizens need to assert their freedom and reclaim it, otherwise, the current undesirable conditions will never cease. 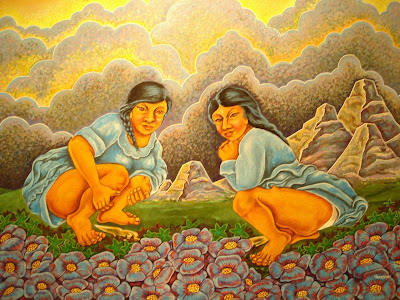 (Peeing Ladies, from my Modern Art in Cuzco Series)