One of the things that I do here in Buffalo to entertain myself is to attend the various music recitals that the music department offers. And a couple of weeks ago, I attended another one, this time, it was a piano recital by Eric Huebner. He's a member of the music faculty, and he happened to give a recital a few weeks ago. And I was looking forward to this, because I think the last time I attended a piano recital was a while ago, back in September 2009.

Anyway, the program included modern and traditional music, and that was definitely fun. The first on the program was a piece called Pangrams, written by Huebner's wife, Caroline Mallonée. It was a quite ingenious piece of work, consisting of 44 different pangrams played altogether, where every pangram makes use of each of the piano's 88 keys. It's like the musical equivalent of the English sentence The quick brown fox jumps over the lazy dog.

The next piece was Gyorgy Ligeti's Etudes Book 3. I unfortunately missed another piano recital earlier this year, by Jeremy Denk, and apparently he played the first two books. Anyway, wow, I've tried playing a Ligeti etude once, I failed. It was so hard, and the thing is, the music is nothing I have seen before. The technique was different, there were so many things that were different that someone learning the pieces would have to reconceptualize what music is, in order for one to study it. If you want to have a feel of how Ligeti's music sounds like, listen to this video of one of his etudes, entitled Désordre.

But I digress. Huebner did a great job playing these. His fingers, oh, it was a marvel to watch. The thing with Ligeti's music, which is also true with the next piece he played, which was Gyorgy Kurtag's Klavierstuck, Op. 3, is that accentuation is a big part. It might sound like just a collection of random notes, but seriously, there's a systematicity that is embedded there somewhere.

The final piece was something less modern, which was Robert Schumann's Kreisleriana, Op. 16. I remember having a copy of this piece, except that I didn't play it. Instead, I played Arabesque, Op. 18, which happened to be in the same book. Anyway, I am not too familiar with Schumann's music, I have this idea that Schumann is like the Wagner of piano, and his compositions are these dense collections of notes that are hard to dissect. Nevertheless, I liked the way Huebner interpreted it, once again I was amazed at his fingering. Watching him play made me think at the skill he has in making it appear that playing those virtuosic pieces required no effort at all.

So yes, that was once again a wonderful night. I had my fill of musical culture and I definitely enjoyed that. 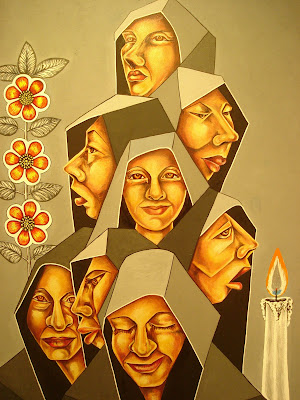 (Nun Pyramid, from my Modern Art in Cuzco Series)