Languages have mechanisms that allow people to indicate that there are more than one entity that is involved in a given utterance. In English, for example, indicating whether an entity is plural or not is important, important enough to have grammatical markers that do the job. We add -s after a word in most cases, and in other times, the verb form changes whether the subject is singular or plural.

So the interesting question is to find out what are the things and situations that license or allow a construction to be plural. Of course, things will get plural if there are more than one people in which the verb is true.

3. The boys are moving the sofa.

Say, the boys are moving the sofa from one apartment to the next. And one of the boys is walking in front of the rest, stopping the traffic so that the rest can cross the street. Can we still say that the sentence in 3 is correct and applies to every boy, even though one of the boys is not actually in touch with the sofa? Some people say that is the case, with collective action.

4. We are building a house.

How about sentence 4? If I say that, with the intention that me and my partner are paying a construction company to build a house so that in the future, we can live in it?

5. We are expecting a child.

Can I say the sentence in 5? What if I am married, and my wife is pregnant, can I say that sentence? Most people think that I can.

However, most people possibly won't allow me to say 6, if I am the husband and my wife is pregnant.

So yes, there's various ways in which utterances can be plural. Not only on the basis of multiple agents, but also based on collective action and collective responsibility. Of course, this is just English, other languages may have more interesting plural strategies. 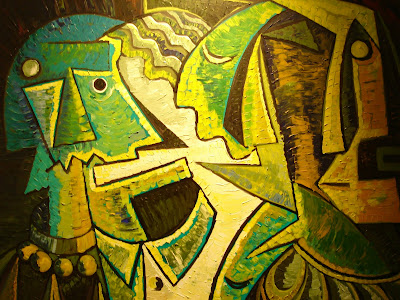 (Cuzco's Picasso, from my Modern Art in Cuzco Series)