The other day, I was in the mood for some experimentation in the kitchen. I just discovered in my cupboard that I still had about half a bottle of balsamic vinegar; it was hiding behind my boxes of tea and cereal. So I figured I should cook with it, especially since the bottle said that it would go bad by the middle of this year.

So I figured out what I wanted to make. I wanted to cook some chicken, since I haven't cooked chicken in a while. I also wanted to make it Italianate, since what other cuisine could I use balsamic vinegar if not for Italian? With that in mind, I headed to the store.

I saw a package of chicken thighs, I needed 6 pieces (since that's usually the most my pot can fit comfortably), so I bought the club pack that contained 10 (and froze the remaining four). I also bought Italian dressing from the salad aisle: the store had it on sale, and somehow it fit the picture. I also bought a package of sun-dried tomatoes, which was on display next to it. Then, I bought a big onion, and finally, I headed to the canned and bottled vegetables section and bought a bottle of marinated and quartered artichoke hearts.

On to the kitchen then. I rinsed the chicken and put it in the pot, and added one cup of balsamic vinegar (this pretty much took care of the remaining quantity in the bottle) and one cup of Italian dressing. I turned the heat to medium high and let it boil and simmer. I basically used the two liquids to braise the chicken (technically that's not true, since braising involves searing the flavor first by browning the meat followed by simmering).

Twenty minutes later, the sauce started becoming thick, as the balsamic vinegar has been reduced. I then added a cup of water to dilute it a little, followed by the onion, which I chopped. I also added the sun-dried tomatoes at the same time. After ten minutes, I added the marinated artichoke hearts, which I drained of its liquid beforehand.

So, after cooking for forty minutes, I now have some tasty experimental chicken with sun-dried tomatoes and artichoke hearts, in a balsamic reduction. It was quite flavorful, so I opted to just make a simple plain couscous (with just butter as an additive, to avoid sticking in the pan) as a side.

Thus, I could add this to my successful incidents of experimental cooking. I love it when I can be cavalier in the kitchen, and still it turns out perfectly well. 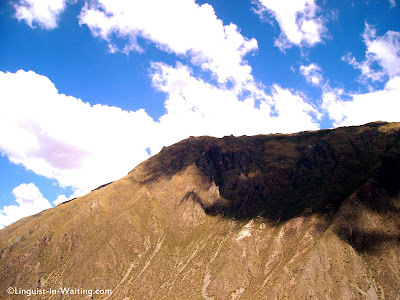 (Mountains and Clouds, from my Ollantaytambo Series)