This week, together with another graduate student, we are running the Super Lab. We have recruited from two undergraduate classes in the department and because of that, plenty of people have signed up to do our experiment. That means that we have participants, and that also means that we will have data that we can work on later.

Previously, I have blogged here that we have a problem regarding participants, in the sense that not a lot of people are showing up because the alternative task has been made easier than the experimental task. Thus, research has slowed down a little bit in the lab. So in order to remedy that, we asked permission from the IRB to recruit from classes in the university, and offer extra credit for people who want to participate. Now the extra credit is small enough that it would not be coercive, thus avoiding the coercion problem. And so far, it works.

It is quite a hectic week. We are running this Super Lab for a week, and sometimes at a given hour, as much as 10 people would show up. It's quite hectic actually, running around, giving people consent forms to sign, giving people instructions regarding the various experiments, and giving people the debriefing sheets once they are done with the task. But, that means that the experiments will be finished by the end of the week, and we have another data set to process.

I just glanced at the results that I have been getting for my experiment, and it seems that the pattern of results are indeed what I have predicted. I like this feeling of experimental and empirical validation, when there are actual numbers that support your hypothesis. So yes, that means that there is a dissertation to be written. I can feel the movement going forward, and it is a good feeling, to tell the truth.

So yes, it's been a hectic first day for the Super Lab, but even though at the end of the day, all I want to do is just to sleep and wish for a back massage, life is still good. I have the data, and all I need to do is write it up. One step closer to graduating and being done. 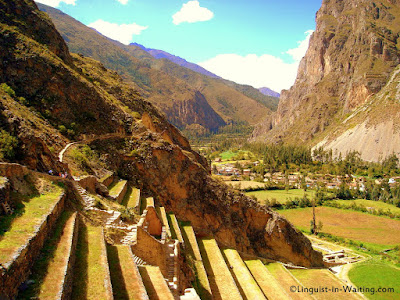 (View of the Sacred Valley, from my Ollantaytambo Series)