Book Review: The Return of the King by J. R. R. Tolkien 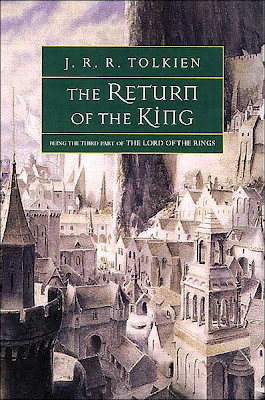 An edited version of this article was first published as Book Review: The Return of the King (Lord of the Rings Trilogy #3) by J. R. R. Tolkien on Blogcritics.org.

So, I finally finished reading the trilogy. I began with The Fellowship of the Ring, followed by The Two Towers. Now, about a decade after the movie-related hype, I finally read the whole three.

Should I put a synopsis here? Perhaps, just for completion’s sake. This is the third and final installment of The Lord of the Rings trilogy, where evil fails and good triumphs. Aragorn returns to reign as king, and Frodo, together with Sam, journey to the middle of Mount Doom. The mission is to destroy the evil ring, of course, but as this ring is evil, and possesses every person that has possession of it, Frodo has a hard time throwing it in the fire. Good thing there was Gollum, because Gollum bites off his finger together with the ring, but loses balance and therefore falls into the fire. This signals the end of evil in Middle Earth, and peace reigns again.

So, that should be the end of things, right? But apparently no. As the four Hobbits journey back to the Shire, they still face little bits and pieces of evil, apparently due to Saruman, who invaded the Shire together with his evil Men. The Hobbits defeat this, and finally, peace reigns in the Shire.

That was pretty much the end of things. Frodo is happy, Sam is happy, until Frodo goes on a journey that the other three Hobbits are not a part of. Fantasy ends, and the story concludes.

The thing is, after reading the three books, I don’t think I was impressed, impressed enough to be excited to read the three books one after another the way other people did it back when the movies came out. I kind of regret that I saw the movies before reading the books, but after reading the books, I still conclude that it wasn’t worth the hype. Or perhaps it is just me, that I am not a big fan of fantasy in the first place. Well, let me explain.

First, I have this impression that fantasy stories always have something to do with travel. Perhaps that is not the case, and there are other fantasy books out there that do not involve traveling, but this trilogy definitely has a big travel component. Characters move into different places, carrying rings, riding horses, marching towards battle, and so forth. There is even a map in the beginning of the book to aid people in visualizing where the characters go. I suppose I find it rather boring that fantasy always involves a travel component. Can’t fantasy be psychological thriller as well?

Second, I wish that the trilogy concluded with the destruction of Mount Doom and evil in general. That was a big climax right there, and it would have been a better ending after all the events that were portrayed in the three books. I wished that the ring was destroyed, and the king was installed, and people return to their respective neighborhoods, and the book concludes. No, instead, the Hobbits return to the Shire and evil is still there. It’s as if there is a big conclusion in the form of the destruction of the ring, and there is a smaller conclusion in the form of the defeat of Saruman after he invaded the Shire. One would hope that the story is already concluded when the ring is thrown into the fire, but no, there’s still a storyline that continues. Plot-wise, I didn’t like that aspect, as it was quite anti-climactic.

So, one year and three books later, now I can say that I have read a fantasy book. I still am not a big fan of it, although I do appreciate the fact that this is considered classical fantasy literature. But aside from that, I felt that it didn’t shine enough for me to be enthusiastic about it. Good triumphs over evil, yeah, I already knew that. I don’t see why one needs three books and a whole alternate universe to narrate that punch line. It was taxing on my imagination, and it never offered something different and new from the other stories that say the same conclusion.

So, as I think it was just an average book, I am not giving it a high score. Granted, I know that my opinion is of the minority here, and most people consider this to be a spectacular piece of literature. 3 out of 5 stars. 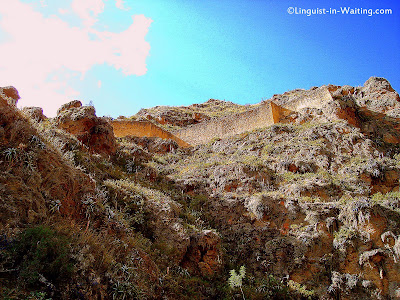 (The View Above, from my Ollantaytambo Series)