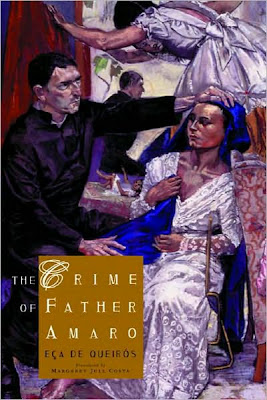 An edited version of this article was first published as Book Review: The Crime of Father Amaro by José Maria de Eça de Queiroz on Blogcritics.org.

I haven't written a book review in a while, and that is because I had been preoccupied with reading this massive work by José Maria de Eça de Queiroz, none other than his most famous novel, entitled The Crime of Father Amaro. And after reading it, I was blown away.

Well, tradition dictates that I narrate a brief synopsis of the book, and this is relatively easy. A handsome priest becomes the new parish priest of a community that is dominated by women. Several ladies act as pillars of society. Among them is a young woman, Amelia, who becomes close to the parish priest. In fact, she becomes too close that she falls in love with the handsome priest, Amaro. Not surprisingly, Amaro also falls for her. However, conflict lies ahead, and this is where the book's plot lies.

Being a priest, one should be celibate and a virgin. One cannot give in to these carnal desires. However, Amaro is also a human. His human side clashes with his religious side, which results in him being one of the most cowardly characters I have ever encountered, but which also leads to him committing the crime which is referenced in the title. What this crime exactly is, I won't reveal here; it is up to you, the future reader, to read and find that out.

As I was reading this book, in the beginning, I thought that I could digest this book in two different ways. First, I thought that this book felt like it was a tragedy, portraying two individuals (Amaro and Amelia) who somehow fell short of society's expectations: Amaro, being a priest, was expected to be celibate; while Amelia, being unmarried, was expected to simply sit down and wait until a man expresses interest in her so she can get married. At first, it felt like the book was criticizing these two individuals.

However, as I moved along, the tone of the book changed. It slowly criticized society in general, and the Catholic Church in particular. The character of Joao Eduardo stands in for this purpose, first as the "liberal" who writes an editorial piece criticizing the Pharisaic nature of the clergy, exposing them as hypocrites. Eventually, the clergy are portrayed as pigs, saying one thing but acting out another. This tone gets stronger and stronger as the book progresses, culminating in the debate between the doctor and a priest, near the end of the novel. The doctor points out the backward, reactionary and retarded methods of the church, saying that priests go against human nature, by requiring the clergy to be celibate and virgins, violently suppressing the most natural of feelings. Then, they are trained to avoid any knowledge and ideas that might shake their faith, which is tantamount to forced suppression of the spirit of investigation and of all real human knowledge. As I read this, it reminded me of how similar it was to my own experience growing up in a similar fundamentalist religion.

Part of me wanted to cheer Amaro and Amelia. After all, they are victims of the society that they were living in. Amaro and Amelia loved each other, but the society they were in simply dictated that they cannot love one another. Somehow, this reminds me of the LGBT community nowadays, where there are still plenty of locations in this world where true love between individuals of the same sex are hampered by the social constraints that are in place.

However, another part of me loathed Amaro and Amelia. I felt like they were two of the most cowardly characters I have encountered in a novel. Amaro was this lanky character who goes to his master the minute he gets into trouble, while Amelia is this girl who cannot think for herself, and is locked in her own mental prison. At times, I wanted to scream to them to think for themselves and act accordingly, for once.

Anyway, the conclusion of this novel is really sad; after all that chaos and drama, things all go back to their resting state. It makes you wonder sometimes whether humans have the ability to learn from their mistakes or not.

Overall, I enjoyed this book. I give it a full 5 out of 5 stars. 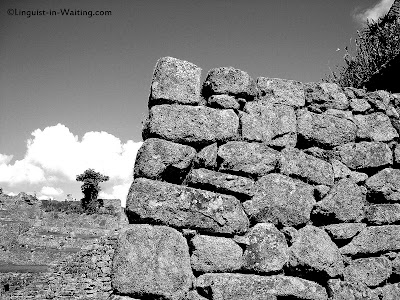 (Stones in Black and White, from my Machu Picchu Series)