The other week, we held an emergency mobile lab. The thing is, my research involves doing experiments, and in order to do experiments, one needs participants. Most of the time, I do experiments with the Psychology Department; my research interests being very inter-disciplinary, I collaborate with the folks in the Psychology Department, and use their subject pool in order to do my experiments. However, there are times when there are more experiments to run than participants. That is when we decide to recruit from other sources. And that is when the mobile lab comes in.

Usually, how it is done is that we go ahead and recruit from the Linguistics Department. However, this is time-consuming and tricky, since the Linguistics Department doesn't have a subject pool that is already set up. Unlike the Psychology Department, which has a subject pool (if you are a student in the Psychology Department taking PSY101, then you have to do experiments as part of the learning process), we don't. So what we do is that we recruit from Linguistics classes, and participation is then counted as extra credit.

There are several hurdles to jump over before this happens. First, we should have that approved by the ethics review committee. The main concern here is that of coercion. The extra credit should not be worth big enough to be coercive. This was all negotiated before, so all of the experiment protocols for our experiments already have the approved relevant clause discussing this.

Next, there is the location and personnel. Unlike the Psychology Lab, we don't have a permanent crew. The Psychology Lab have higher-level undergraduate students who function as research assistants, so the graduate students do not have to do all the working of running the experiments with the participants. However, we do not have research assistants, so we have to run the experiments ourselves. In order for that to happen, I assembled a crew of seven people. I was asked to be the head of this operation, therefore that was one of the first things I did. I went and recruited several other graduate students and asked for their help. Once I had enough people, I assembled a schedule, so that we would know which days would work for all of us. Once that was done, I informed the instructors of the classes that we would be recruiting from.

We then visited the classes and passed around a sign-up sheet for the students to sign up. Upon entering that into the schedule, we also had a system of reminding the students via email about their appointment, so that the probability of a no-show would be reduced. Since it was extra credit, in theory, if people didn't want to do it, it would not affect their grade whatsoever.

I also checked the names of the potential participants against a database that we keep in the lab, so that I can see whether they had any incompatibility issues with the current experiments that we were doing. And we also devised a system of keeping track of the participants and the experiments they did, so that we can later go ahead to the database and enter this information, so that if in the future they visit our lab again, they would be prevented from doing any experiment that is incompatible with their previously participated experiments.

So, after a week of running participants, things went to a close. There were some issues that I had to deal with: I had a crew member call in sick, we had some software issues in the beginning, and we also had some hardware limitations such as having only two computers when we were scheduling four people within an hour, and so forth. But, everything was fixed, and things ran smoothly.

So yes, that was me being a lab manager for a week, and in the end, we got the data we needed, and research continues. Life is good. 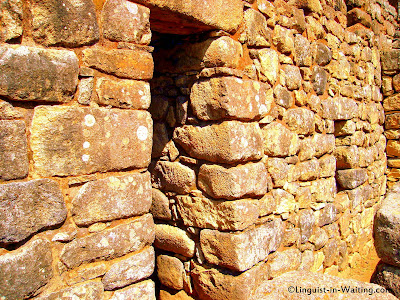 (Walls, from my Machu Picchu Series)