So I am in Toronto, once again. Having friends in this city is awesome, add to that the fact that it is just a short hop across the border, that it makes it easy for me to visit it every now and then. I've been here for a few days, and so far, all I have done, aside from hanging out with my friends, is eat.

First, I should say, I didn't eat. I drank. I drank tea. We went to this tea shop in Queen West called David's Tea, and wow, this is paradise if you are a tea lover. I loved this place: the selection is awesome, the staff is knowledgeable and friendly, and overall, it was just a great tea experience.

Up next, is a visit to Hosu Bistro for some Korean cuisine. I missed my stone pot bibimbop, so we decided to get some here. That was great too.

The next day, I had a craving for some real Chinese dumplings after visiting a Hindu temple. So I went down to Chinatown and headed over to Mother's Dumplings to get some. I ordered a small plate of pork and bokchoy dumplings, dunking them in my own soy sauce and spicy oil dip, together with some seaweed salad. I loved this lunch.

That night, I also headed to Oakville, to pay a visit to another friend, who I haven't seen in more than a year. She was performing in a concert, singing Handel's Messiah, and after that, before catching my train back to Toronto, we headed to a pub called Queen's Head together with her other friends and I had a tall serving of Carlsberg.

The next morning, we had breakfast in the Rustic Cosmo Cafe in West Queen West. I had banana pancakes, among other things. Unfortunately, this awesome cafe which makes their own jams do not have a website, I think.

And for lunch, we went to the Okonomi House, in Charles Street, near Bloor/Yonge. I also missed okonomiyaki, which are these delightful Japanese pancakes. Unfortunately, this restaurant also does not have a website.

And today, we headed off to Brockton Village for Pho Linh, which is a little cash-only establishment that serves the most amazing pho. I got a Hue-style pho which was quite spicy, and it made my sinuses running.

As our lunch was quite spicy, we wanted dessert. So we went to Brazil Bakery and bought some flan. Not too sweet, not too bland, it was just the right amount of sweetness.

So yeah, I've just spent a few days here in Toronto, and yet I think I have eaten in many different places that would make it feel like I was on a round-the-world gastronomic tour. They are quite awesome, and I think I will be back again! 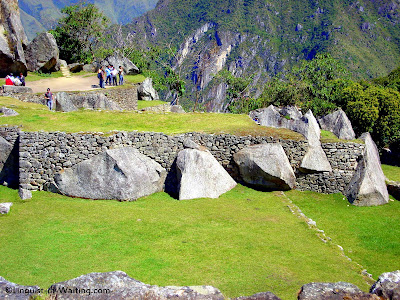 (Size Comparison: Man Versus Stone, from my Machu Picchu Series)