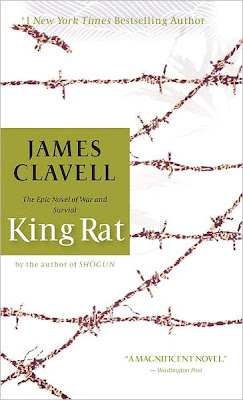 An edited version of this article was first published as Book Review: King Rat by James Clavell on Blogcritics.org.

When you're in a pinch, what do you do to survive? Survival in the extreme sense of the word, is the main theme of this novel, which is the fourth book (chronologically, that is) in James Clavell's Asian Saga. That being said, this was the first book to be published, in 1962.

Set in 1945, this novel tells the story of an American corporal, nicknamed the "King", and Peter Marlowe, an English Flight Lieutenant. The setting is in Changi prison, a prisoner of war camp in Singapore, administered by the Japanese. The King is a black marketeer, who befriends Marlowe, for his language skills. Eventually, as the novel develops, they get entangled in several different deals, and the friendship between the two men develop as well. Eventually, the war ends, and their friendship collapses.

Contrary to the other books in the Asian Saga, I cannot say I loved this book. The first three books were about the East meeting the West, and the conflict that rises from that encounter. Shogun was about an English adventurer in the 1600s who lands in Japan; Tai-Pan was about a sea merchant and the founding of Hong Kong; and Gai-Jin was about the conflict between the foreigners who were in Japan against the feudal warlords. This time, however, this "East-meets-West" conflict is not the dominant feature. Sure, there are the Japanese who are holding the American, English, and Australian soldiers captive. But that isn't the main conflict. The main conflict lies between the individual soldiers themselves. The main conflict lies between King and his men; and Grey, who is the military police, and is a Javert-like character of the book.

Aside from the fact that this book seems to not form a parallel with the other books in the series, there are other features of this book that doesn't sit well with me. There is this aspect in which there seems to be no climax in the story. Instead of a book that builds up the tension as one reads along, there is just suspense after suspense. King and Peter just have various adventures along the way, as they live their lives inside the prison camp. They deal with diamonds, selling counterfeit pens, farming rats, all under the nose of Grey. Sure, it has the same form as the other books in the series, in the sense that they can be conceived of as epics, but this one doesn't feel like an epic. Instead, it feels like an airport novel, just written to have suspense at every page, so that the reader keeps on turning it to pass the time.

Perhaps the only thing that made me have a good impression on this book was the realistic approach that Clavell took with respect to the character of King, who was transformed into a difficult personality in the end. I guess one's castle crumbles eventually, and when Changi was liberated and the Japanese surrendered, the King wasn't the King anymore. That's just human nature, I suppose. I won't reveal anything else aside from that, but the contrast between the King at the beginning of the book and him at the end was just quite drastic.

So, overall, have I enjoyed this novel? Meh. I have read better ones. Did I love it? No. Did I like it, possibly. I guess I would not read it on its own, but I definitely would, in the context of the other books that belong to its series. 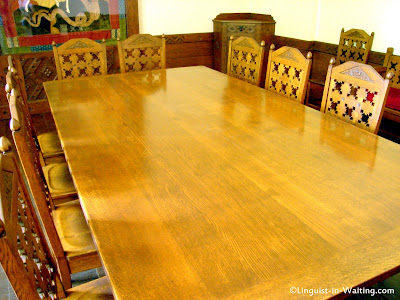 (Conference Room, from my Cathedral of Learning Series)